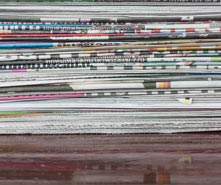 CareerCast’s annual Jobs Rated report ranks 200 jobs across a variety of sectors, using key metrics of growth outlook, income, environmental conditions and stress. Based on these factors, some very important jobs rank unfavorably against other professions.

The worst jobs of 2017 are some of the cornerstones of our society, and great careers for those with the personality types able to face stress (and sometimes danger) head-on.

The two lowest-ranking jobs of 2017 have recently taken center stage in American culture in a way not seen in many years. The value of trained, professional Newspaper Reporters and Broadcasters has taken on heightened importance recently as well as increased scrutiny. Journalists covering politics in particular, have been under extreme pressure as they strive to credibly cover the news and keep our nation informed.

Working extensively in the public eye and often under tight deadlines contributes to the high stress rankings for both Newspaper Reporters and Broadcasters. In addition, both industries have also felt the years-long squeeze of diminishing job prospects, due to declining advertising revenue that has impacted the newspaper, radio and television industries. The two professions rank among the 13 worst for job outlook, with negative growth forecasted through 2024 in this year’s Jobs Rated report.

In a similar vein, Disc Jockey also has a poor hiring outlook: a 10% decline is anticipated by 2024. Station consolidation, computerized playlists, and multiple stations using the same announcers have negatively impacted this profession. A poor outlook combined with low annual wages, it scored as one of the worst jobs of 2017.

Competitive atmosphere and declining job prospects contribute to Advertising Salesperson’s appearance among the worst jobs. The industry’s high-stress environment counts against it, but Advertising Salespeople also owe their low ranking in part to the ongoing decline of traditional media.

The Bureau of Labor Statistics (BLS) projects a 3% decline for Ad Sales Reps. The annual median pay, averaging less than $50,000 a year, trends to the lower end of the Jobs Rated report. Combined with high stress, Advertising Salesperson lands at No. 194 of the 200 careers ranked in this year’s Jobs Rated report.

Other examples of this year’s worst jobs underscore the debt of gratitude we owe to some of the professionals who make the world a safer place.

Some people have the mettle to run into burning buildings, or sign up for military service. Others might confront one of the most common phobias as part of their career. Such is the path of Pest Control Workers, a field that ranks No. 196 this year.

Arachnophobia – the fear of spiders – is the third-most prevalent phobia of Americans. Removing spiders from homes is just one job a Pest Control Worker takes on. Imagine having to take rattlesnakes from a building in Arizona, or remove an alligator from a residential space in Florida.

Add that Pest Control Workers often have to work in confined spaces, another common phobia, and it’s no wonder the job scores poorly for environmental conditions. The annual median pay is also low, a recurring theme among the worst jobs of 2017.

A risky profession, Loggers face a higher fatality rate than any other job. Retail Salesperson and Taxi Driver, which round out the 10 worst jobs of 2017, both earn annual median incomes below $25,000. With many retailers closing their stores and ridesharing companies like Uber and Lyft causing increased competition for traditional taxi drivers, it’s not surprising that these professions landed among the worst jobs of 2017.

The following are the 10 worst jobs of 2017, per the Jobs Rated report. For a complete breakdown of the methodology, visit: http://www.careercast.com/jobs-rated/2017-methodology