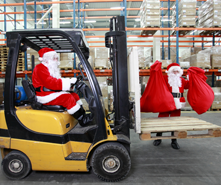 The holiday season brings a temporary employment boost every autumn, and 2015 is no exception. In fact, the outlook for seasonal hiring this year is already favorable.

Whether you’re unemployed and seeking a full-time job or just looking to earn some extra spending money over the holidays, now is a good time to apply for one of the many seasonal jobs available. Retailers are expected to add about 755,000 jobs to their payrolls from October through December, according to Challenger, Gray & Christmas.

Automatic Data Processing Inc.’s report on private-sector hiring for October showed 182,000 new hires, slightly ahead of the organization’s projections for the month. There should be more hires in November and December, particularly from large companies.

Online retailer Amazon intends to hire 100,000 seasonal employees this year, per a statement released last month by vice president of North American operations Mike Roth. That’s an increase of 20,000 from a year ago.

Just a few of the jobs needed to meet the holiday rush are customer service representatives and distribution warehouse staff.

And, with Amazon, the largest online retailer bulking up for process of orders, someone is needed to help handle the influx of deliveries. Parcel deliverer is a great holiday job with plenty of opportunities. Industry-leader UPS expects to hire 90,000 employees in the next two weeks. In line with Amazon, that’s an increase over recent years’ employment.

While Americans increasingly shift their shopping focus to online distribution, traditional brick-and-mortar business still need extra hands at the holidays. Retail salespersons are always in demand this time of year.

Many of CareerCast.com’s best seasonal jobs are tied into traditional customer service, and the traffic inherent with consumers being out-and-beyond. For example, days spent shopping for gifts and seeking out decorations require fueling, and restaurants also meet the demand for office holiday parties. Retail and food service are obvious cornerstones of holiday employment, but this time of area is a boon for entertainers, as well.

We all grew up with Santa Clauses at malls, department stores and pop-up outlets, but the traditional Santa Claus is just one in-demand performer at the holiday season.

“The hours were long. Everything from set up to back-to-back shows took time and energy. It was hard, long, exhausting and absolutely rewarding,” he says. And, as many seasonal job-seekers pursue long-term employment at the end of the holiday season, Connor says his part-time gig turned into more opportunities for the future. But whether your goal in finding seasonal employment is a longer term deal, or just the chance to make some additional spending money, know what is expected of you up front.

“I assumed that because it was a Christmas job, it would end on Dec 24, so I made plans to travel with a friend as of Dec 26,” one seasonal part-time employee told CareerCast.com. “I had no idea that the managers expected us to continue beyond that during the return and price-cut season. No idea!”

The following are some of your best options for seasonal employment in 2015: