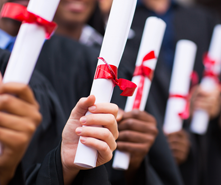 As undergraduates return to campuses across the nation, they are taking some of the first steps on their career paths.

College has become an increasingly hot-button topic of conversation in recent years. With a collective $1.5 trillion owed among college loan borrowers in the United States, the cost of attending college has sparked some debate over the value of postsecondary education.

Last decade’s recession negatively impacted the landscape for job seekers. Meanwhile, the reduction in openings coincided with still-ongoing growth in the amount of college-educated seekers on the market. The National Center for Education Statistics reported ahead of the 2017-18 academic calendar year that college enrollment jumped by more than 5 million since 2000.

More prospective employees with greater educational training competing for fewer jobs translates to an especially competitive market. Employers plan to hire 1.3 percent fewer graduates from the Class of 2018 than they did from the Class of 2017, according to the National Association of Colleges and Employers. That marks the first hiring decrease since the Class of 2010, at the end of the recession, when employers planned to cut hiring by 7 percent.

Despite the hard toll the Great Recession took on the job market for college graduates, the Bureau of Labor Statistics’ 2017 end-of-year report found those with a bachelor’s degree earned an average of $1,193 per week, compared to $761 for those whose highest level of education was a high school diploma.

Still, because of the hardships faced in a post-recession – from overwhelming to debt fewer guaranteed opportunities – selecting the right educational path is more important than ever.

For those thinking of skipping a college degree, there is much debate over this issue. The statistics show that college graduates have higher employment rates, bigger salaries, and more work benefits than high school graduates. However, crippling student loan debt often forces college graduates to live with their parents and delay marriage, financial independence, and other adult milestones.

Learning a trade profession may be a better option than college for many young adults. The high number of young adults choosing college over learning a trade has created a 'skills gap' in the US and there is now a shortage of trade workers such as machinists, electricians, plumbers, and construction workers. Those who choose not to attain a college degree can build a rewarding and profitable career by gaining the skills and training for these in-demand occupations.

CareerCast.com evaluated statistics from the BLS, trends from the Georgetown University Center of Education and the Workforce, and the National Association of Colleges and Employers; referenced against the 2018 Jobs Rated report, we determined the best college undergraduate majors for undecided students and those looking to make a career change.

Employment rates for recent Accountant degree program graduates historically linger over 90 percent, making it one of the most-steady fields of study for landing a position. The need for Accountants – a field the BLS expects to grow by 10% in the next eight years – suggests continued demand.

The versatility of a Business Management background opens the doors in a variety of promising careers, many of which are highly ranked in the CareerCast.com Jobs Rated report. A degree in Business Management can be translated to Human Resources, Operational Research Analysis, and Management Consulting.

Opportunities even exist in industries one might not assume: Medical Services Manager, the No. 6 job in the 2018 Jobs Rated report with a growth outlook of 20%, is a potential career path for a graduate with a Business Management degree.

Some of the highest-paying careers tracked in the Jobs Rated report require extensive postsecondary schooling. A common theme for a few – like Physician and Pharmacist, or the completely unrelated Chemical Engineer – is that an undergraduate degree in Chemistry is a potential gateway.

Financial Analysts – typically working behind the scenes for an organization – and Personal Financial Advisors -- offering professional expertise for individuals and families – have growth outlooks of 11 and 15%. Those are paces well ahead of job-market averages, and are reflected in healthy hiring numbers for recent graduates.

Another gateway to abundant opportunities in technology, a degree in Information Systems can be an excellent step toward the in-demand field of Information Security Analyst.

An education in the Information Systems field should have a vast shelf life in the future economy, with more and more data being stored in Cloud-based technology, and increased reliance on telecommunications.

While various careers in communications face uncertainty amid tumultuous times – jobs like Newspaper Reporter and Broadcaster rank among the worst of the 2018 Jobs Rated report due to hiring instability – similar skill sets can lead to rewarding opportunities in Marketing.

Refer to the Best Jobs of 2018 Jobs Rated report, and one will notice a bevy of mathematic careers ranked near the top: Mathematician, Statistician, Data Scientist and Actuary all appear in the Top 10, a byproduct of burgeoning opportunities through a variety of industries fueling high wages and exponential hiring outlook.

Although some universities are beginning to offer degree programs with specific emphasis – for example, Actuarial Science is offered at some universities – a more general education in Mathematics opens the possibility to pursue a variety of promising career opportunities.

Engineering majors are in-demand across a wide variety of disciplines. Mechanical Engineering may be the most attractive option for a prospective student, however, as its application can be carried over to a variety of industries: automotive, robotics, construction.

What’s more, while some other potentially lucrative engineering fields typically require postgraduate education, the recommended level of education for a professional Mechanical Engineer is a bachelor’s degree. That means getting to work without accruing additional debt.

Demand for Nurses ranks among the highest for all careers. The need for highly skilled Nurses translates to one of the highest employment rates of all degree programs for entry-level graduates, per the Georgetown University CEW, as well as a healthy $46,360 annual median entry-level wage per the BLS.