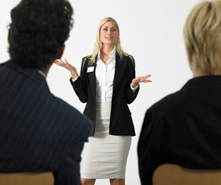 Wage inequality and greater opportunities for women in the workplace are trending topics in the public forum. Actress Patricia Arquette used her podium at the 2015 Academy Awards ceremony to broach the subject, and various 2016 presidential hopefuls have made the wage gap a cornerstone campaign issue.

Many of the careers ranked as our best jobs for women in 2015 defy the gender conventions of the workplace. Some rank well because employers actively pursue the most qualified women, while others provide competitive salaries regardless of gender. And a few are rated highly because as entrepreneurs, women can create a satisfying career that rewards their skills and experience without consideration of their gender.

Understanding the nuances of specific niches often is critical regardless which industry a woman enters. And because technological jobs are such a bedrock of the 21st century economy, STEM (science, technology, engineering and mathematics) employers would be wise to meet growing demand through the active hiring of more women, say recruitment experts.

The variety of professions that welcome women has greatly expanded as women are becoming more fearless and demanding in their career planning and options,” says Ruth Goran, CEO of GlassCeiling.com.

While STEM fields are notorious for lacking gender diversity, some of the best jobs for women are bucking the trends.

Similarly, 40% of all enrolled students in statistician programs were women last year, reports the Washington Post. In fact, careers powered by mathematics that rely heavily on statistical analysis, such as actuary and statistician, dominate the top 10 of our 2015 Jobs Rated report.

Almost 58% of advertising and promotions managers are women, and a whopping 79% of all event planners are women, reports the U.S. Bureau of Labor Statistics (BLS). The stats are similar for education administrators, 63% of whom are women, and market research analysts at 61%.

Alison Podworski owns and operates a public relations and marketing firm in Agawam, Mass., which she opened after a decade working in television as a journalist across New England. She says that thriving in PR and marketing requires the same dogged dedication she and her male colleagues cultivated studying to be TV reporters, only now she “pounds the pavement” for clients instead of leads on stories.

Still, competition for these jobs is fierce, and Podworski advises other women to never be afraid to ask for more responsibility.

“Getting an internship is huge,” she says – standard advice, but she adds an important caveat: “Don’t be afraid to ask to do the grunt work or look over an experienced person’s shoulder. Be respectful, but be assertive.” One way to stand out is to become an expert in a particular niche of any given field.

Healthcare is the other industry most at the core of the 21st century economy, and women are well represented in the sector, including in such highly ranked jobs as dental hygienist and occupational therapist. Not only do women make up the majority of the workforce in these two professions, but they are two of the highest projected growth fields in healthcare over the next eight years.

The following are our best jobs for women in 2015, culled from Jobs Rated report data. All wages and outlooks listed are via the BLS and represent the entire labor force for each career.