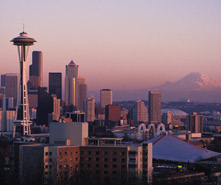 Seattle’s majestic scenery is not the only attractive feature for those seeking to relocate for a career change. The Emerald City boasts an unemployment rate of less than 5%, well below the national average of 7.4% and down significantly from 2012.

The improving job market in Seattle features a wide range of career options, including several of the region's best ranked jobs, according to the CareerCast.com Jobs Rated Report for 2013. Software engineer, online advertising manager, physical therapist and many other health care professions all rank as both great jobs to have, and jobs that are now more available in Seattle than they've been in years.

Software engineers have no shortage of opportunities in Seattle. In fact, the U.S. Bureau of Labor Statistics projects the Seattle-Bellevue-Everett metropolitan area as the fourth highest employment region for software engineers in the nation.

Seattle is home to many tech programs, both large and small. Sessions says that in 2013, approximately 350 video gaming and other software application companies call the city home. She says that number was closer to 30 year ago.

Microsoft continues to lead Seattle’s IT growth, employing more than 42,000 in its Redmond headquarters, many of whom are engineers. And a recent surge at Amazon.com to convert many part-time employees to full-time status, including software engineers, is bolstering the company’s rank as a major employer.

Amazon’s Seattle headquarters also is a great place for online advertising managers to flourish. Online advertising revenue nationally rose 17.8% in 2013 from 2012, according to the Interactive Advertising Bureau in a report conducted with PricewaterhouseCoopers. Amazon.com’s increased 45% from 2011 to 2013, per an eMarketer research study.

Sessions says that IT professionals with a broad skill range have abundant opportunities in Seattle, because virtually every field is reliant on some kind of technology to function. That includes computer systems analysts who maintain an office’s critical files through cloud computing, or a web developer who oversees a business’s website.

To be sure, Seattle’s economy isn’t built on technology alone. The city’s typically healthful lifestyle makes it a great place for healthcare professionals to succeed. The American Physical Therapy Association ranked Seattle in the top 10 cities for Baby Boom generation health.

As Boomers remain active in their later years, careers such as physical therapist, occupational therapist and chiropractor are in high demand. Physical therapist is No. 3 on our list of best jobs in Seattle for 2013 because of its improving hiring prospects. The 3% annual projected growth rate for physical therapists by the Washington State Employment Security Department is up from 2012, and is expected to continue to rise as the Baby Boom generation ages.

Seattle’s Boomer generation will also impact the market for nursing candidates. Seattle has had an overcrowded market for registered nurses at times, but a recent University of Washington School of Medicine report estimates 31.7% of nursing professionals currently working in the field are ages 55 or older, thus approaching retirement, which will create many new job opportunities.

“Nursing is a field that has a lot of ebbs and flows. The tendency recently has been an overflow [of job seekers], but we really haven’t seen that locally.” Sessions say. “We need critical care nurses. We need nurses with RN bachelor’s degrees.”

Another field in consistent demand, Sessions says, is welding. “In 20 years working [in the Seattle labor market], employers are always saying ‘we can’t find enough welders,’” she says. “The industry has come far in its technology…but if you can weld, you will get a get job in all forms of manufacturing.”

She says welders are of particular value to Seattle’s $8 billion maritime industry, which accounts for roughly 55,000 jobs in the area.

Below are the 13 best jobs in Seattle based on the CareerCast.com Jobs Rated report. Salary estimates and growth rate projections are culled from the Washington State Employment Security Department.