The Best Jobs for Millennials in 2015

The Best Jobs for Millennials in 2015 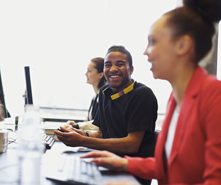 The Millennial generation – the largest generation in the workforce -- has been tagged with negative workplace stereotypes that they're narcissistic, obstinate and lacking initiative. Yet smart companies know that unless they start hiring these young employees soon, their future is bleak.

But Millennials - defined as those between ages 16 and 34 - are also the most educated demographic in American history who are motivated "to change the world,” says Lee Caraher, a San Francisco-based author of the book, Millennials & Management: The Essential Guide to Making It Work at Work. In fact, he and other workplace experts agree that Millennials are essential to the growth of the economic and job landscape.

That realization has been reflected in suddenly robust hiring of Millennials.

“This is the strongest year of employment growth for this generation since 2007,” says Steven Rothberg, president and founder of CollegeRecruiter.com, a niche job board specializing in matching recent college graduates with internships and early-career positions.

“We’re getting close to where we’re seeing an equilibrium where just about every college-educated young adult who wants to be employed can easily be employed,” Rothberg says.

And, with more job opportunities available, Millennials have the opportunity to disprove the negative stereotypes about the younger generation.

Yet even Caraher says she's struggled with the typical challenges that occur when hiring Millennials. After six new hires went awry, she says she refocused her strategy and stopped relying on tactics that worked for Baby Boom and Gen-X candidates. Instead, she focused on making the work more meaningful and giving new hires a chance to help change the world, even in small ways, which is a key ingredient for many Milennials.

Jacinto agrees, saying that employers must demonstrate to Millennials just how they can make an impact, and it's critical they believe the company is being transparent with them. “They don’t want to make copies just to make copies,” she says.

The flipside is that employers often are seeking skills that Millennials sometimes lack, says Caraher, in particular universal skills that apply to most new jobs.

“We want people who have high integrity, who can write and communicate, who are curious and who are eager to participate,” she says. “Without those skills, even the best Millennial candidates will fail,” she adds.

Rothberg recommends gaining some of those skills before diving into the job search through volunteer work.

“If you’re able to, take a committee or board position at your school, a small non-profit or your church. Work on a committee, be on a board,” he advises. “Organize a car wash to benefit a family whose home burned down. Do something that allows you to tell a story about your leadership abilities.”

Not surprisingly, the workers of the future will hold the jobs of the future. Burgeoning fields with high-growth outlooks headline our list of best jobs for Millennials. These positions, such as social media manager and data scientist, are still in their infancy.

And for regular readers of our Jobs Rated reports, the common refrain is that STEM (science, technology, engineering and mathematics) careers are some of the most promising. That’s no different for the Millennial generation, based both on BLS job outlooks and the return-on-investment for various college majors.

For instance, majoring in a STEM field is the single best way to guarantee a strong return-on-investment after graduation, reports PayScale. And while completing a STEM degree requires a lot of hard work, there are many career paths to choose from.

For instance, the growing need for infrastructure improvements nationally means that Millennial civil engineers will have their choice of opportunities at strong pay rates. And the growing demand for new apps and other mobile components spells a similar outlook for software engineers.

To be sure, not every job that ranks as one of the best for Millennials is going to pay big bucks immediately, but the potential for upward mobility quickly is fair compensation for many.

Advertising account executives just starting out can expect to earn somewhere around $37,000, U.S. News and World Report finds, but that figure almost doubles midway into the duration of one’s career.

Job hopping also is an issue for many Millennials, who don't think twice about changing employers more often than previous generations. Caraher says keeping a Millennial for more than three years is “a huge win.”

But a Millennial’s ability to develop a good rapport with an employer before leaving can benefit both parties: flourishing at one company before moving on is a stepping stone to career advancement for the employee, and happy workers who leave may agree to serve as positive references for the employer.

For those Millennials who have already graduated college and cannot endure more student loan debt to switch careers, moonlighting and freelancing may be the best paths into one of the industries in our Jobs Rated report, says Jacinto, who also suggests taking a public speaking course and attending career networking events. And just because social media is entrenched in the Millennial lifestyle, it should be seen as just one tool in the job seeker's toolbox.

“Get in touch with people in the industry,” Jacinto says. “Do a mix of both face-to-face and social media, like LinkedIn. Social media is a great option that everyone should take advantage of, [but] continue the conversation by suggesting that you talk further over coffee.”

That's true even for social media managers, which is just one of the best jobs for Millennials in our 2015 report below. Salary and outlook data are culled from BLS estimates, and jobs were chosen using metrics from our Jobs Rated report methodology.