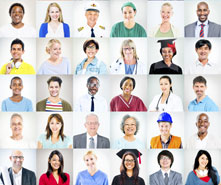 To quantify the many facets of the 200 jobs included in our report, we determined and reviewed various critical aspects of all of the jobs, categorizing them into four "Core Criteria;" that is, the general categories that are inherent to every job: Environment, Income, Outlook, and Stress. In the environment scores each job’s physical demands are taken into account. See “Environment” below for more details.

The environment ranking system is designed so that the higher point totals reflect lower quality environments.

Environment Factors: The ranking system used to evaluate a job's environment considers and measures two basic components of every work environment: the physical and the emotional environments. For each occupation, points were assigned for any adverse working condition typically encountered in that job. Thus, the greater number of points a job scores, the worse the rank; the fewer points awarded, the better the rank.

The following categories and points were used to rate the two basic components of work environment--emotional and the physical--each accounting for approximately half of the total environment score:

In order to compute the Physical Demands of a job, we awarded higher scores to jobs with greater Physical Demands and lower scores to jobs with lesser demands. We arrived at these scores by compiling data used by the Department of Labor. One point was awarded for each physical component of a job. These components include lifting, pulling, pushing, standing, walking, stooping, kneeling, crawling, climbing, crouching or reaching. We also awarded points for hazards faced, exposure to various kinds of weather, the need for stamina and the work environment.

One to five points was also added for each degree of lifting required based on the five categories previously mentioned, which range from 10 pound lifting at sedentary jobs to 100 pound lifting for very heavy work. One point was also added for each hour, or fraction thereof, that the average worker puts in on the job. These determinations were based on U.S. Census data and sundry estimates provided by those familiar with the work habits of various professionals and tradespeople. The total points accumulated represents the score used to determine the rankings.

Average Work Week (Hours) Factor: After the raw scores are added together, the average work week in hours were added to the totals. This adjustment provides that jobs which require longer working hours have the point total adjusted upward on a scale that escalates proportionally with the number of hours worked.

Since all incomes shown in this table are estimates rounded to the nearest $1,000, there would be many ties if the mid-level income was the sole basis of the score. Instead, the score was computed by adding the estimated mid-level income and the Growth Potential. Below is an explanation of Growth Potential and how it is computed in the scoring system.

In the tables that lists income rankings a dollar-sign was added showing the score as “$94,209.” As you can see, the way this score is expressed very closely resembles an average dollar-denominated income found in an income survey. Therefore, the dollar-sign precedes the score as an accommodation to someone who wishes to get at-a-glance estimates of average incomes.

The determination of what constitutes each level of income used in our scoring is as follows:

EMPLOYMENT GROWTH: The “mega factor” for outlook as defined here is expected employment growth through the year 2022, as forecasted by the Department of Labor. It is expressed as a percentage increase in jobs in a particular career field during the period, 2012-2022, which is the Department’s latest available estimate.

The Jobs Rated ranking system simply uses this figure as a whole number rather than a percent, and adds and subtracts several numbers to it that are derived from other pieces of data; one is a score for the annual unemployment rate and the other is the multiple that one can increase one’s salary. Below is more on these additional factors.

INCOME GROWTH POTENTIAL:This refers to how much a worker can increase his or her income. See the preceding section about income scores and refer to the subsection “Growth Potential” for an explanation as to what this is. This score for Growth potential is then added to the employment growth score.

UNEMPLOYMENT: Unemployment data reflects estimates, mainly from the Department of Labor, for the entire year 2014. In our data analysis we divided the percent unemployed into quintiles. The first quintile is the lowest unemployment and is assigned as score of 1. The highest unemployment scores is assigned 5.

We did this because we regard the Department of Labor’s figures as unreliable and nothing more than an estimate, even though they present their data with some specificity, for example to the nearest 1/10th of a percent (i.e. 7.7%).

As many know, the Department of Labor’s unemployment rates do not account for discouraged workers, or those who are “underemployed,” such as a college graduate who may have a low paying job such as a waiter, simply because he or she cannot find a job commensurate with their educational level. In sum, the quintiles used in our scoring translate to:

The amount of stress a worker experiences can be predicted, in part, by looking at the typical demands and crises inherent in his or her job. Our ranking system for stress considered 11 different job demands which can reasonably be expected to evoke stress (see list below).

For example, "deadlines" was one demand measured. Journalists, who often face daily deadlines, received the maximum of 9 points in this category. In contrast, biologists, who seldom face deadlines, received no points. The demands measured and the point ranges assigned to each area are as follows:

When computing a score for each occupation, points were added together for all 11 categories.

The scores –given we rank 200 jobs – generally have many ties. To break these ties, we added a derivative of income growth potential, since jobs with greater rewards for a good performance often have a stress component. See “Growth Potential” under “INCOME” on page 3 for an explanation. We took this growth potential figure and expressed it as a multiple, rather than as a percent. (i.e. 103% would be expressed as 1.03) This multiple was not used for multiplication in our scoring, rather as an addition to the demands measured listed under “STRESS” on page 4.

Overall Rankings refer to the sum of the rankings in each of the above four Core Criteria. Each are equally weighted in the overall scoring, which is used as the basis for rankings.

This methodology provides that the jobs with low point totals in the Overall score will be ranked high; those with relatively high scores will fall toward the bottom of the Overall Rankings.

In a few instances, some jobs achieved the same overall point totals. When this occurs each job with identical scores is assigned the same rank, hence there may be a jump in the consecutive rankings. For example, in the 2015 Overall Rankings, Accountant and University Professor (Tenured) achieved point totals of 276, tying for 40th rank. Therefore there is no rank of 41. The rankings jump from 40 to 42 for the next highest scoring job. This method of treating tying scores was also used in the other 4 rankings for Environment, Income, Outlook and Stress.