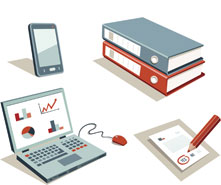 To quantify the many facets of the 200 jobs included in our report, we determined and reviewed a wide range of critical aspects and categorized them into four "Core Criteria"—that is, the general categories that are inherent to every job. These are environment, income, outlook and stress.

Each of those core categories includes a range of sub-categories that are related to the core. For instance, physical demand is integrated into the environment scores (see below for more details).

Much of the data used to evaluate each job comes from the U.S. Department of Labor and the Bureau of Labor Statistics (BLS), as well as from a range of other governmental agencies, trade associations and private survey firms.

Jobs Rated calculates the Environment score for each job by measuring two basic factors common to every work environment: the physical and the emotional components.

Points are assigned for every adverse working condition typically encountered, so the greater number of points that a job scores, the worse the rank. Conversely, the fewer points a job gets, the better it ranks. The following categories and points are used to rate the work environment:

One point was awarded for each physical component of a job. These components include lifting, pulling, pushing, standing, walking, stooping, kneeling, crawling, climbing, crouching or reaching. We also awarded points for hazards faced, exposure to the elements, stamina required and the workplace atmosphere.

These determinations were based on U.S. Census data and estimates provided by groups related to the industries being scored. The total points accumulated represent the score used to determine the rankings.

The score associated with each job indicates its ranking among the 200 tracked.

As you can see, the way this score is expressed very closely resembles an average dollar-denominated income found in an income survey. Therefore, the dollar-sign precedes the score as an accommodation to someone who wishes to get at-a-glance estimates of average incomes.

For the purpose of the 2014 Jobs Rated report, income appears as projected by the BLS.

The "mega factor" for outlook as defined here is expected employment growth through the year 2020, as forecasted by the Department of Labor. It is expressed as a percentage increase in jobs in a particular career field during the period, 2010-2020, which is the Department’s latest available estimate. The Jobs Rated ranking system simply uses this figure as a whole number rather than a percent, and adds and subtracts several numbers to it that are derived from other pieces of data; one is a score for the degree of unemployment and the other is the multiple tied to one's ability to increase one’s salary. Below is more information on these additional factors.

The amount of stress a worker experiences can be predicted, in part, by looking at the typical demands and crises inherent in his or her job. Our ranking system for stress considers 11 different job demands which can reasonably be expected to evoke stress (see list below). Each demand is assigned a range of points. A high score is awarded if a particular demand is a major part of the job, fewer points are awarded if the demand is a small part of the job, and no points are awarded if that demand is not normally required. For example, "deadlines" was one demand measured. Newspaper reporters, who typically face daily deadlines, received the maximum of 9 points in this category. In contrast, biologists, who seldom face deadlines, received no points. The demands measured and the point ranges assigned to each area are as follows:

Overall Rankings refer to the sum of the rankings in each of the above five Core Criteria. However, they are not equally weighted. In the Overall Ranking system, one third of the score is based on Income rank, one third on Outlook rank and one third on “Preferential Factors,” which are the rankings in Environment/Physical Demands and Stress, each one of these being weighted equally, though their sum is weighted as one-third of the Overall score. You can also think of them as “comfort levels” pertaining to the workplace environment, the physical demands and the stress factors that we’ll accept if the money and long-term security is good.

The logic, simply put, is that most of us work mainly to earn a living and the most important criteria are therefore Income and Outlook, the latter being of course related to employment and income security over the long haul. If we can work at a job that has a high income and a good lookout, we will accept lots of things that go with these jobs, e.g. Stress, Physical Demands and the Environment, be it good or bad, in our opinion.