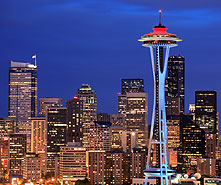 Tourists may know Seattle for its spectacular scenery, vibrant downtown, great coffee and (unfortunately) abundant rain, but it also has another reputation – as a “brain gain” city, able to attract educated workers from throughout the U.S. and around the globe. Among the most-educated metro areas in the nation, the city’s many technology, healthcare and engineering companies offer plenty of opportunities for skilled workers. And so it’s no surprise that Software Engineer, a job at the forefront of the growing tech industry, would rank as Seattle’s best job for 2012.

CareerCast.com also has named Software Engineer as America’s best job of 2012 based on a combination of low stress, pleasant work environment (think Google and Facebook offices) and few physical demands that risk serious injury. In Seattle, hiring by firms like Microsoft and Amazon – not to mention one of Google’s largest offices in the U.S. – has helped create a demand for Software Engineers that is expected to grow by 3.3% annually through 2013. But this isn’t the only high-tech job to rank well in the emerald city, as Computer Systems Analyst and Web Developer also finish among Seattle’s 12 best jobs, with projected annual growth rates of 2.6% and 2.7%, respectively.

In addition to technology, jobs in the growing healthcare sector also rank well in Seattle this year, with Optometrist, Audiologist, Physical Therapist and Occupational Therapist all boasting a projected annual growth rate above 2%. And while Market Research Analyst, which involves performing research to determine the sales potential of a product, has more stress and a less desirable work environment than other positions, its projected hiring growth of 3.5% through 2013 is best among all jobs ranked in the top 12 this year.

At 7.2% overall, the unemployment rate in Seattle is better than the national average, and has been trending downward over the past few months. Based on a measurement of average stress levels, work environment, and physical demands, combined with projected local job growth through the end of next year, the following positions rank as CareerCast.com’s 12 best jobs in Seattle for 2012: