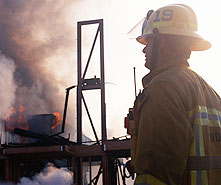 Pressure Drop: Workplace stress can damage productivity, mental well-being and physical health. But is an anxiety-free office worth a potential loss in career satisfaction and job security?

Job-related stress has long been the nemesis of workers around the globe. Stress has been linked in studies to everything from low productivity to increased illness to obesity. Fallout from the recession has only compounded the problem. Many work harder for less money, and wonder if they'll still have a job at day's end. Combine this with new technology that makes it easier than ever to work around the clock (and even on vacation), and it's no wonder that on-the-job stress – and finding ways to manage it – has become an ever more important issue.

While it's possible to find countless books, teas, exercise techniques and more offering you a way to relax, this focus on peace at the office raises a question: Is there such a thing as too little workplace stress?

Surveying 200 different professions based on their potential to strain employees' nerves, the 2010 Jobs Rated report reveals some surprising trends among the year's most stressful and least stressful jobs. In particular, many low-stress jobs offer little room for advancement, and often don't appeal to ambitious, educated job seekers. On the other hand, a number of the most stressful jobs are considered highly sought-after positions, and workers frequently undergo rigorous and costly training for the chance at one of these careers. Becoming an Appliance Repairer or Janitor, for example, may be good for the heart rate, but neither career is exactly fulfilling. Given a choice between these professions and, say, becoming a Surgeon or Commercial Pilot, it's not hard to guess what direction many job seekers would choose.

Another eye-opening fact is that among this year's most stressful jobs, only a few suffer from high levels of unemployment. In fact, the nation's most stressful job – Firefighter – has one of the lowest unemployment rates of all. That said, while the fear of losing your job may keep you awake at night, there are other things to worry about if you're working in one of these occupations, which make up the Top 10 Most Stressful Jobs for 2010: Firefighters frequently work irregular or unusual hours, or remain on call throughout the night. They risk heat exhaustion, smoke inhalation, and serious injury while on the job, and even the state of anticipation preceding a major threat can be highly stressful in itself. Firefighters are also sometimes required to spend long hours outdoors in bad weather.