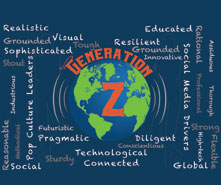 The professionals of the future take their first steps toward the jobs of the future, as this new generation of young Americans, sometimes called Generation Z, are trading in their mortar boards for paychecks.

Those born from 1995 through 2010 make up Generation Z. This demographic accounts for 25 percent of the total population, and the first wave of these young professionals is in the process of leaving school for the labor market.

With the upcoming influx of Generation Z employees, coupled with Baby Boomers’ retirements, the American workforce is growing demonstrably younger.

Millennials -- defined as the generation born between 1980 and 1995 -- now account for almost 40 percent of the employment market. By 2020, a University of North Carolina study estimates that percentage will grow to 46.

Generation Z outranks the Millennial generation by around 1 million, so combine the two, and the labor market promises to be teeming with workers under 40 years old in the next half-decade.

Meanwhile, the top consumers of goods and services by 2020, at 40 percent, will be Generation Z, according to a FastCo study. That translates to work done by young people, for young people.

Organizations need an understanding of this growing consumer base to succeed in the years to come. Opportunities for Market Research Analysts will grow, corresponding with the push to market to the growing Generation Z consumer base.

Other growing and promising career fields will thus be tied directly into the needs of the younger demographics. Financial Adviser is one such field.

A Northeastern University study reports Generation Z is focused less on income for wealth-building, and more to avoid debt. With the average retirement age expected to push 70 by 2050, early planning and smart savings strategies are paramount for the new generation, starting from the outset of their careers.

Similarly, Human Resources Manager is both a rewarding career path with high-growth options, and an opportunity for Generation Z to reach out to peers as the job market trends younger.

The Princeton Review reports two of the top four degrees current college students receive are communications and business administration – both of which can set one on the path to becoming a Human Resources Manager.

Generation Z also has had a lifetime of exposure to the Internet and easy accessibility through the proliferation of smartphones. The changing technological landscape plays a big role in the job prospects for Generation Z. For example, Statistician is a hot career path with an expected growth of 34% by 2024, per the U.S. Bureau of Labor Statistics. The boom of data collecting and analysis has helped turn this field into one that spans many different sectors.

The following are 10 of the best jobs for Generation Z as identified by CareerCast. Salary and growth outlook are provided via the BLS. Growth outlook is current to 2024.