Your Guide to Escaping a Bad Career

Your Guide to Escaping a Bad Career 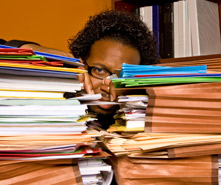 All too often, people enter into a career with high expectations and find themselves burnt out after only a few years. Many of these same people will decide to just “stick it out” with these unfulfilling jobs, their dread of work growing with each passing day.

Why do so many of us decide to keep doing something that doesn’t make us happy when we know that if we don’t make a change, we may be doing this for the next 40 years? Here are some of the most common excuses that people use for why they stick with what is clearly the wrong career for them. Hopefully reading through them will help you figure out how not to get stuck on the wrong career path.

“I’m good at what I do here. There’s no point in changing careers.”

This excuse is a classic case of not wanting to move out of your comfort zone. Just because you’re good at something doesn’t necessarily mean that you should be doing it for the rest of your life. I’m very precise and detail-oriented, so I’m great at data entry, but I don’t want to spend 40 hours of my week doing that. And if you’re good at what you’re doing for your current job but aren’t happy, chances are that you can apply your skills in a different manner in a different position.

“I don’t have the skills to move to another industry.”

A lot of people balk at the idea of doing a complete career 180 because they think that they don’t have the skills to move to another industry or that they’ll have to go back to school to become qualified. In some cases, you may need to obtain an advanced degree in a new field, but you’d be surprised by how often your current skills can carry over to other fields. Are you a good communicator, critical thinker, and researcher? Those are the kinds of skills that are needed in a wide range of fields, from marketing to risk management to grant writing.

“I owe it to my college degree to stick this out.”

Your degree is an inanimate object; you don’t owe it anything. If you switch careers, don’t think of it as a waste of your degree. The majority of college graduates end up in careers that don’t directly correspond to their degree, and as I mentioned above, the skills that you gained completing your major will likely carry over to a variety of fields.

“I don’t want people to think that I’ve made a mistake.”

It seems silly, but not wanting to admit to having made a mistake is an actual reason why people end up stuck in the wrong career. Towards the end of my junior year of college, I switched from being a Psychology major to an English major, and my only hesitation with the switch was because I was worried that my friends, professors, and parents would think that I was admitting defeat as a Psych major. I ended up changing my major anyway and was much happier for it. Don’t let what other people think be the thing that keeps you stuck in the wrong career. Chances are, your friends and family will support you if you want to switch to a more fulfilling job!

One of the most important things that someone can do to avoid going into the wrong career is to actually do a bit of research on that career. Sure, you’ve taken some classes, but that doesn’t really tell you much. Start with a site like CareerQA that gives you an overview of a bunch of different fields and lets you ask questions, then work with your career center or try to find someone in that field to speak with directly. Don’t go into a career blind or you’ll be putting yourself in a position where you’ll be counting the days until retirement. Like it or not, work is going to be a huge part of your life – you might as well do something that you enjoy!

Josh Weiss-Roessler is a professional resume writer and co-owner of Weiss-Roessler Writing. He frequently shares career and job search advice with others, as well as writing about a huge range of other topics. When he’s not writing, you can often find him spending time with his wife, one-year-old baby boy, or two excitable dogs in Austin, Texas.