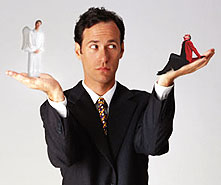 The CEO of BP recently released video of the oil spill in the Gulf of Mexico which indicates that the environmental damage is much greater than previously known. According to news reports, this information was in his possession for some time, but he chose not to provide it to the public. His act may not have been illegal, but it set a new low for ethics at work. And, it is the polar opposite of an emerging focus on workplace fairness, which is transforming employment activity as we know it.

Today's workplace is seeing a growing number of job seekers who are transforming themselves into career activists, or people who recognize that they (and everyone) have been endowed with a specific talent, and are determined to express that unique gift as part of their jobs. A career activist works for their individual fulfillment, but accomplishing that requires that they first embrace the concept of workplace fairness.

The dictionary defines the word Fairness as "being consistent with ethics." Hence, career activists serve their own best interests by respecting the best interests of everyone else. They will not obey an illegal order from their boss, because harming the community or the planet prevents them from being fulfilled. They will not cut corners, shade the truth or hide dangerous situations because victimizing those around them diminishes both who they are and who they aspire to be. Workplace fairness not only makes worker's jobs more fulfilling, it makes them better people as well.

Career activists, in effect, accept the responsibility for distinguishing between right and wrong at work. Soldiers are expected to exercise such discretion in the heat of combat, and career activists expect employees to adhere to the same code at work. If the people can demand that the military defend them in accordance with the Geneva Convention and rules of war, then they should hold themselves to a similarly strict set of rules to practice workplace fairness.

That commitment to workplace fairness means more than simply adhering to the letter of the law. Certainly, career activists don't steal from their employers. But equally as important, they don't stoop to lying or cheating either. They are, for example, the HR Manager who refuses to backdate stock option grants for the executives in her company. They are the Salesperson who will not sell a product he knows is defective. They are the Engineer who refuses to approve construction work that is shoddy, and the Actuary who will not sign a financial statement they know to be untrue.

Career activists do not set themselves up as the ethics police, but they do hold themselves to a high standard of personal conduct. They refuse to stoop to behavior that they know is wrong or to justify it as something they were "forced" to do by their superior. They strive to be principled practitioners of workplace fairness. Career activists will not work for organizations that condone, encourage or require illegal, unethical or inappropriate behavior. And if, by chance, they find themselves employed by one, they refuse to go along.

Career activists take such a stand knowing full well that demanding workplace fairness can have negative consequences. They may be met with disapproval and even public criticism. They may lose out on a raise or promotion they would otherwise have earned. And, they might be fired because, ironically, they "don't live up to" the expectations of their employer.

There's no question that adhering to workplace fairness can be damaging, especially in today's difficult economic climate. It can derail a person's career progress, undermine their financial security and impose a psychological burden on them and their family. The one thing it cannot do, however, is diminish a person's self-respect. Career activists are not perfect, but they always know that they're reaching for the high bar of personal integrity at work. Practicing workplace fairness may cause a blow to a job seeker's career trajectory, but workplace fairness will never cause a blow to their self esteem.