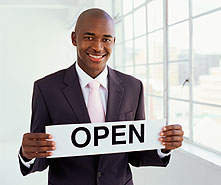 It was a beautiful day when Jocelyn Gold realized that her future was junk. After accompanying her brother on a few runs for his home-based 1-800-GOTJUNK? franchise, the former financial-services marketing consultant knew that the opportunities in hauling other people's castoffs was her calling and soon began the process of opening her own home-based 1-800-GOTJUNK? operation. The franchisees specialize in removing the refuse that local trash haulers and organizations such as the Salvation Army won't take. The material is taken to a dump or reclamation center and fees are charged based on the amount and type of junk removed.

"I've always wanted to run my own business," explains the Oakland, Calif.-based franchisee. "Working at home definitely has its advantages and keeps overhead down." After less than six months in the business, Ms. Gold estimates that her salary is about equal to what she made in her marketing position, while the potential to grow her income is much greater.

While there aren't many hard statistics on the home-based franchise market, the segment definitely has grown, says Don DeBolt, former president of the International Franchise Association (IFA). Mr. DeBolt estimates that out of the 1,200 to 1,300 active franchise concepts, at least 150 are suitable for home-based businesses.

The relatively low up-front cost attracted Bill Peterman. He and his wife, Karla, own a home-based Furniture Medic franchise in Austin, Texas, and travel to office buildings, homes and other locations to refinish, repair and touch up wood furniture and finishes. The Petermans had seen a television commercial for Furniture Medic franchises (there are more than 550 in the U.S. and internationally) and decided to check out the opportunity.

Furniture Medic seemed like a bargain compared to other franchises they had investigated, such as a hardware store that required hundreds of thousands of dollars up front. Initial investment was limited to the cost of the van and some equipment. Before leaving their jobs as counselors to individuals recovering from brain injuries, they managed to stash away six months of living expenses. However, Mr. Peterman admits, the first years were a scramble. "During the transition, we took any piece of business we could get," he recalls. "Now, we routinely refer business to [competitors] and work a lot less. It's up to us to determine how much money we want to make."

Still, working from home isn't as easy as hanging a shingle in front of your house. It's a good idea to be diligent about examining the opportunity as well as your own career interests and passions to make sure that the match is a good fit. Some potential home-based franchisees believe wrongly that opening a home-based franchise is a way to cut their 40-to-50-hour workweek.

"Starting a home-based franchise is like starting any other business. It's going to require a lot of work at the start," says DeBolt. "You might work 60 to 70 hours a week in the first years, then slow down to a 30-to-40-hour week in three to five years as your business grows and you get more established."

According to Mr. DeBolt and other experts, there are five primary issues that prospective franchisees should consider before investing in an opportunity. While these tips won't guarantee success, ignoring them can increase the risk of failure:

In fact, many "opportunities" charge an up-front fee for information but have no underlying business and offer little or nothing in the way of support. Franchises, on the other hand, are licenses to use a name and a trademark and generally offer a great deal of continuing support. Even home-based franchises must fully disclose their list of other franchisees to prospects considering investing in the franchise and often have specific protocols that must be followed.

Franchising experts emphasize the importance of spending one to three months fully investigating any opportunity you are considering. Call other franchisees. Check out the opportunity with the International Franchise Association and the Better Business Bureau. A track record is very important, they say, but good opportunities also can be found in new franchises. The key is to be diligent in gathering information.

Some people like to take advantage of an established franchise, while others prefer to be in on the ground floor, helping to make decisions that will guide the company, say experts. There's no right or wrong answer, but be sure that you are thorough in checking out the opportunity. Take at least two to four months to research and compare franchises, in order to avoid making snap decisions.

Some franchisees may wish to invest in a business coach who can, for a fee, help with motivation and setting long-term goals. And while the idea of having more flexibility can be attractive to many home-based franchisees, it's important to also have a regular schedule to keep productivity high. Many a home-based business has lost valuable hours when an owner has decided to mow the lawn or take care of chores in the middle of the workday.

Experts also agree that home-based franchises need to be more aggressive about sales and marketing. While traditional businesses can benefit from the visibility of a storefront or signage, no one's going to walk down the street and say "I wonder what they sell at this house?"

When you're investigating a franchise opportunity, it's important to look beyond face value and find out what's really involved in running that business. The majority of your job, as owner, may be spent on administration and planning vs. providing the day-to-day products or services of the business. Your venture may be in trouble if the demands don't match your work strengths and your interests.

If possible, try to analyze your work strengths and weaknesses. For instance, if you're an introvert, you might not do as well with a job that involves a long or intensive sales process, whereas extroverts may thrive in that environment. Extroverts, on the other hand, may wither in a business that doesn't allow ample contact with others. Mr. DeBolt adds that you must consider the cost, as well as the worst-case scenario if the business fails and that investment is lost.

"Know how much investment you're willing to put at risk," he says. "Investing in any business, including a franchise, is risky. We like to think that (the franchise structure) will lessen that risk, but business is business and there are no guarantees."

Prospective franchisees should investigate local ordinances before moving forward. Restrictions on home-based businesses vary significantly from town to town, so it's best to be certain that the venture complies with those rules and regulations. For instance, some municipalities may allow home-based businesses as long as the business doesn't attract customers to the home. Other areas may require that the business obtain various licenses. And you may need a variance from the local zoning board to run a business from your home. By checking to see that the business can be operated legally from the home, you'll protect yourself from fines or being shut down by local law enforcement.

Managing growth also can be a challenge for home-based franchisees who suddenly discover they need to hire employees. You may be uncomfortable having employees work out of your home, for example. Often, says Mr. DeBolt, when it's time to hire employees, it's time to move out of the house. "That's a great way [to grow]," he explains. "You really bootstrap in the beginning and then grow into a location as you can afford it."

While there are no guarantees when it comes to opening a home-based franchise, this option allows you to enter into a proven business model for less than traditional out-of-home franchise opportunities. Since the parent company of the franchise often recoups a portion of the franchise profits for a period of time, it's in the best interest of that company to do everything possible to ensure the health of new operations. Therefore, many franchise programs offer extensive training and support to those who buy into their program.

Gwen Moran is a freelance writer and author of two books, "The Complete Idiot’s Guide to Business Plans" and "Build Your Own Home on a Shoestring." Before becoming a full-time writer and speaker, she owned Moran Marketing Associates, a marketing communications firm, for nearly a decade. Her firm’s exceptional growth and management practices were recognized when she was named a regional winner and national finalist in the United States Small Business Administration’s "Young Entrepreneur of the Year" awards in 1996.