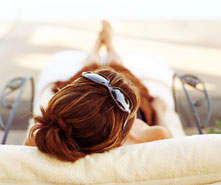 It was 4 p.m. on a recent Friday – a time of the week when I usually relax and leave the rest of my to-do list to finish over the weekend. But as this recent weekend approached, I kept pushing myself, heart pumping, to get to the bottom of my list of planned tasks for the week.

After years of , I was trying a new approach by taking off at least one entire day every weekend this month, away from reporting, writing and all other work. Early on, I hated it. As simple as it seemed, sticking to a time-off plan stressed me out at first. What I didn't see right away was that my little test was forcing me to improve the way I work.

Amid layoffs and burgeoning workloads, it seems, working any time, all the time, has become a habit. A survey of 605 U.S. workers last spring by the Society for Human Resource Management found that 70% of employees work beyond scheduled time and on weekends; more than half blame "self-imposed pressure." Now, new research suggests some have reached the point where a paradoxical truth applies: To get more done, we need to stop working so much.

A groundbreaking four-year study, set for publication in the October issue of Harvard Business Review, seems to confirm that getting away from work can yield unexpected on-the-job benefits. When members of 12 consulting teams at Boston Consulting Group were each required to take a block of "predictable time off" during every work week, "we had to practically force some professionals" to get away, says Leslie Perlow, the Harvard Business School leadership professor who headed the study.

But the results surprised Harvard researchers and Boston Consulting executives alike. Working together to make sure each consultant got some time off forced teams to communicate better, share more personal information and forge closer relationships. They also had to do a better job at planning ahead and streamlining work, which in some cases resulted in improved client service, based on interviews with clients. Boston Consulting is so pleased with the outcome that the firm is rolling out a similar teaming strategy over the coming year on many new U.S. and some overseas projects, says Grant Freeland, senior partner and managing director of the firm's Boston office. "We have found real value in this," he says. "It really changes how we do our work."

Other companies are putting the brakes on work in other ways. At KPMG, a professional-services firm, managers use "wellness scorecards" to track whether employees are working too much overtime or skipping vacation, a spokesman says. At Fenwick & West, a Silicon Valley law firm, "workflow coordinators" review attorneys' hours to avert overload.

And at Bobrick Washroom Equipment, North Hollywood, Calif., a 500-employee manufacturer, staffers are expected to leave in time for dinner. "If you walk around here at 5:30, there are going to be very few lights on, and that's what we expect," says Mark Louchheim, president. He sees family dinners together as important to the well-being of employees and their children, and he also believes setting limits on work motivates people to work smarter.

In the Boston Consulting study, most of the four- or five-member teams were asked to guarantee each consultant one uninterrupted evening free each week after 6 p.m., away from BlackBerrys and all contact with work. Each team held weekly meetings to talk about the time-off plans, work processes and what consultants called "tummy rumbles"-gut worries or concerns about their project.

Requiring hard-driving consultants to take time off was "nerve-racking" and awkward at first, says Debbie Lovich, a Boston Consulting executive who headed one of the teams. Some fought the idea, claiming they would have to work more on weekends or draw poor performance ratings.

But the point of the experiment wasn't to eliminate the "good intensity" in work-the "buzz" from constant learning and "being in the thick of things," Harvard's Dr. Perlow says. Instead, researchers targeted "bad intensity"-a feeling of having no time truly free from work, no control over work and no opportunity to ask questions to clarify foggy priorities, she says.

Ms. Lovich adds: "We wanted to teach people that you can tune out completely" for a while and still turn out good work. The work itself became the focus, "because if you know a night off is coming up, you're not going to let things spike out of control," she says.

After five months of predictable time off, internal surveys showed consultants were more satisfied with their jobs and work-life balance, and more likely to stay with the firm, compared with consultants who weren't part of the experiment. As word spread, other consultants began asking to join the study, Ms. Lovich says. And some clients told researchers the teams' work had improved, partly because improved communication among team members kept junior consultants better informed about the big picture.

Bobrick Washroom Equipment's policy to get workers home for dinner came as a shock to Janice Blakely when she joined the company years ago after working "long, long hours" at an energy concern, she says. Seeing staffers at Bobrick leave by 6 p.m., "I thought, 'Wow, this is not normal."' But in time, the policy "made me look at my performance and tighten up on what I'm doing," says Ms. Blakely, a marketing manager.

Mr. Louchheim, the Bobrick president, says that employees who habitually stay late may be revealing poor work habits. "We worry about whether they can delegate properly and prioritize their work," he says. Adds Chris Von Der Ahe, a Korn/Ferry International recruiter who works with Bobrick: "People who do well there are well organized and able to plan their work well."

Dr. Perlow says an individual worker can get similar results "by challenging oneself to say, 'I'm going to cut off' " work at a certain time every day or every week. " 'Now, how am I going to get work done in the time I have?' This is meant to open your eyes to the possibility" that the way you work can be changed.

In my own experiment, I have managed to keep at least one weekend day work-free so far this month. This has forced me to put proven time-management principles into practice: Plan blocks of work time and stick to the plan; set short-term deadlines to keep work from spiraling out of control; and keep up with email daily, to avoid backlogs.

The rewards have been surprising. On one recent Monday, after an invigorating weekend of working out, attending church and watching college football and hiking with friends, I quickly solved a work problem that had baffled me the previous week. Asked to assess my work this month, my editor, John Blanton, said my columns have been fine. "I'd say, from our perspective, start enjoying your weekends," he wrote in an email.

This, I hope, will get to be a habit.