Why Networking Is Your Best Strategy

Why Networking Is Your Best Strategy 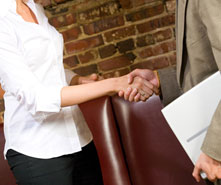 If you’ve recently launched your job search, you likely know about the importance of networking to uncover opportunities. But can you name any specific steps you’ve taken to grow and connect with your network? Or do you answer that question by saying something half-hearted, like: “Well, I called a few people to let them know I’m looking, and asked if they knew about any openings.”

Networking should be a fully integrated component in the life of every business person. It will lead to stronger contacts and friendships that can help in every aspect of your work. And during the early stages of job hunting, networking for information about career opportunities should become your primary interest and given more attention than any other aspect of your search. It isn’t until you start interviewing that networking can take a smaller, but still critical role.

A true story that I love to share involves a senior-level accountant who lost his position in a corporate restructuring, and he didn’t want to relocate far from his home. He received company-paid outplacement counseling and spent the next few months following the standard process of researching opportunities, making calls to schedule interviews, tracking listings on a wide range of online job boards, and sending resumes to logical employers. This process led to a few new leads every week, but none that were such a perfect match that his interviews brought job offers.

One Friday afternoon after another unsuccessful interview, the accountant pulled into his local gas station on the way home. After the station owner struck up a conversation with the accountant and asked, “how are things going,” instead of giving his standard reply of “just fine,” the accountant answered honestly. He explained that he’d lost his job a few months before, and wasn’t having any luck finding a new position close to home. The station owner asked what he did, and when the owner heard he was an accountant, he said: “My sister was telling me last weekend what a hard time her company is having finding a new accountant, and she’s just a few miles from here.” Needless to say, the accountant had a job interview a few days later, followed by an offer within a week, which he accepted.

How many of us would tell a gas station owner (let alone our own accountants, lawyers, clergy, the parents of our children’s friends and others we see every day in our lives) that we’re looking for work? Not many, but such networking truly remains one of the most effective methods of identifying and landing a new job.

The first comment I typically hear after telling this story is, “Well, networking is great if you’re extroverted, but I’m an introvert. How can I network with dozens of people when I’m basically shy?”

Shyness truly can be an insurmountable roadblock to networking for many candidates. But one rule I’ve heard told many times by both career advisers and introverted candidates who network successfully is that understanding how to network effectively is the key to success. It’s never about asking for a job, so making a direct request for help isn’t required. Instead, it’s about chatting one-on-one with someone you know (or someone who was suggested by someone you know) about common interests and how you might be able to help them. By creating a basic script, you can get the conversation started and overcome your natural hesitancy to talk about yourself.

Before launching into your script, be sure to ask the usual questions about your contact’s job, family or latest vacation to break the ice. Once that nicety is covered, say something along the lines of:

“The reason I’m calling is to let you know that I’m planning to make a job change. I’m eager to find a new opportunity that challenges my skills as a (fill in your function). Would you happen to know anyone who works with (my function) and might be able to share leads and ideas with me?”

Of course, this is a very simple approach and can be revised in many ways. But the point is that such a script provides a non-threatening, easy method for turning a casual conversation into a great source of leads. And that’s the goal of effective networking, whether you’re a job hunter, a recruiter or something in between.