Why More Lawyers Object to Their Careers

Why More Lawyers Object to Their Careers 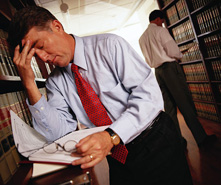 Unhappy lawyers often feel guilty about wanting to find a new profession. Not Robert Saypol. He spent two years with a law firm and nine more as a sole practitioner before accepting a sales and administrative job with a New Jersey mortgage bank. "I hated to get up in the morning," says Mr. Saypol, 49. "My life was consumed with solving other people's problems all day, at night and on weekends," he says. "Now, I can take my kids to the park and go on vacation without worrying about other lawyers trying to steal my clients."

The collegial days of cozy law-firm partnerships and hefty sign-on bonuses for new attorneys are gone. Spurred by corporate funding cuts for outside counsel, profound structural changes have shaken the profession. Business-hungry lawyers are turning against one another and threatening the job security of established attorneys. At many firms, only rainmakers earn new partnerships, while associates toil ungodly hours in fear of being fired.

"Being a good lawyer isn't enough anymore," says Eva Wisnik, a New York career adviser and executive recruiter specializing in the legal field. "The pressure to bring in new business – whether you're a law-firm partner or on your own – is intense."

Disillusioned attorneys eager to enter new fields worry that they won't find rewarding, less-demanding careers, which has created a booming niche for career counselors. Yet the task often is easier than most lawyers expect.

"Anyone who's graduated from law school has very marketable skills employers are looking for," says Douglas B. Richardson, a leadership, communication and career management consultant in Narberth, Pa. "You have strong oral and written communications skills, are adept at assessing needs and setting priorities, and you can think analytically." While lawyers may not work well as part of a team, which eliminates them from many general-management jobs, "they make great individual contributors for project-based and consulting assignments," he says.

Fields that tend to welcome disgruntled attorneys, according to recruiters, include strategic planning, public relations and human resources, especially in such quasi-legal functions as employee relations. Litigators with well-honed persuasive skills are viewed fondly for their ability to thrive in win/lose situations. Recruiters cite growing demand for ex-litigators in academic, government-relations, corporate-training and sales positions.

Skills you can sell

Convincing an employer to hire you shouldn't be tough once you learn how to sell your skills effectively. One former lawyer says she developed a story to tell interviewers that glossed over her decision to change direction three years ago. "I didn't criticize the law. Instead, I said I had a responsibility to my youngest child to find a less-demanding schedule, and people were so admiring of my sacrifice, they never questioned my reasoning," says the career changer, whose last-born child was in high school at the time.

In the end, her ability to negotiate and reach resolutions, talents she acquired while practicing law, helped her land her job as executive director of a community health-care organization in Abington, Pa. "I can anticipate risk and minimize potential problems better than most job hunters, and because I'm a lawyer, interviewers think I'm smarter than if I was a teacher or nurse. This isn't fair, but that's what they think," she says.

Some layers seek less-stressful careers by joining family businesses they previously shunned. Former attorney Gary Blum, now a professional investor, says he has more time now to spend with his family, both socially and professionally. In such a nurturing environment, he now can indulge his passion for playing the stock market. "I trade daily and enjoy it immensely," he says.

While practicing civil law in Los Angeles for five years, Mr. Blum says he'd "typically work on a case for months, settle, and never know who was right and who wasn't. But when trading stock options, I get instant confirmation of my success or failure. It's much more rewarding." So is helping his father with legal matters that were usually left to his company's outside counsel, such as employee rights, vendor contracts and real-estate acquisitions, he says.

"In the current cutthroat environment, every law-school student should be prepared not to practice law," says Mr. Blum, 49. "The trick is learning how to use your consciousness of legal rights and obligations in another field. In fact, that knowledge is critical whether you're a consumer, business executive or lawyer."

Barristers who can't overcome the guilt of wanting to leave their profession have to decide whether they're responding to the opinions of others, rather than a legitimate reason to stay the course. Of course, some entered law for the wrong reasons.

"Everyone thinks they can be a lawyer if they won fights with their mother or majored in history. But for many lawyers, the detail work of law is never fulfilling," says Brian Siegel, 50, a tax attorney who left a partnership with a major Philadelphia firm to join a venture-capital group. He says his writing and analytical skills are critical in his new position. "And now I'll be at the front end of every deal, not at the back end creating pages of documents."

Knowing when to find a new vocation boils down to whether you're happy and your career is advancing. "There are lots of careers in which people ride to horse too long," says Mr. Richardson, a former search consultant and lawyer. "It doesn't matter how much time you've logged as an attorney. If you can't stand how the profession has changed, get out."