Where Would Jobs Rated Rank Being On A Presidential Ticket?

Where Would Jobs Rated Rank Being On A Presidential Ticket? 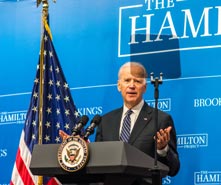 The Washington Post recently published a great read on the remarkably non-glamorous job of running for Vice-President, using the CareerCast.com Jobs Rated report as a frame of reference for the rigors of the gig.

Newspaper reporter's ranked at the bottom of our annual report on 200 jobs each of the last three years, the result of the job's high stress, continuously dwindling opportunities, public scrutiny and often low pay.

There are jobs that the Jobs Rated report doesn't track for a variety of reasons. Being a star NBA player, for example, might rank pretty highly, but it's an exclusive job held by a very small percentage of Div. I college basketball players -- say nothing of the general population.

Likewise, there have been only 47 Vice-Presidents in United States history, with either Tim Kaine or Mike Pence taking the role on next, barring unforeseen circumstances.

Because of the job's exclusivity, Vice-President does not appear on the Jobs Rated report. However, our friends at The Washington Post have a great point about the possibility of Vice-President contending for a spot near the bottom, were it one of the 200 jobs we tracked.

As Teddy Roosevelt said: "I would a great deal rather be anything, say professor of history, than Vice-President. "

Good call, Pres. Roosevelt: University Professor ranked No. 38, and Historian No. 61. Neither works in the public eye to the extent the Vice-President does, and certainly not to the degree of a VP candidate.

Candidate's perhaps worse than actually serving as Vice-President, as The Washington Post posits. It includes all the campaigning, media appearances and scrutiny, and fundraising duties, without the same endgame the presidential nominee seeks.

The job's improved slightly since becoming an appointment of the presidential candidate. When Roosevelt joined William McKinley's ticket in 1900, he did so as a bit of political strategy. New York Senator Thomas C. Platt and others in the Republican Party wanted Roosevelt out of the more prominent role of New York governor.

And if you worry your boss might dislike you, be thankful that you've never had a relationship as acrimonious as the tension between Andrew Jackson and John C. Calhoun.

Pres. Jackson and his Vice-President did not see eye-to-eye on secession, a microcosm of the national attitudes in the first half of the 19th Century.

Legend has it Jackson told his VP, "John Calhoun, if you secede from my nation, I will secede your head from the rest of your body."

Unless you work for Kevin Spacey's character from Horrible Bosses, odds are you've never had management speak to you in such a manner.

While the nature of the position's changed considerably, the qualities of the job would not score well on Jobs Rated: high stress, working in the public eye, responsible for the well-being of others -- including the nominee, if a running mate happens to run with a candidate prone to gaffes.

Best of luck, Mr. Kaine and Mr. Pence. We don't know where on the Jobs Rated report your position might appear, but the initial outlook isn't pretty.