When References Attack: Getting Recommended After a Layoff

When References Attack: Getting Recommended After a Layoff 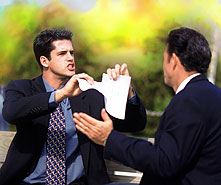 Most people can think of at least one co-worker with whom they have a massive personality conflict. Unfortunately, if this individual is their boss, college department head or HR representative, at some point they will likely be needed for a vital job reference.

When you have a miserable relationship with a superior, it's easy to suspect that they'll sabotage your job search, ruining your chances of finding a better career and leaving you begging on the street. Agonizing this way can lead to sleep loss, excessive worrying, and a general cursing of your entire existence. But if this scenario sounds familiar, don't be embarrassed. You'd be surprised how many otherwise rational people go into an emotional frenzy obsessing about potential job search catastrophes, when just one good reality check would probably put their fears to rest.

If you're freaked out about being badmouthed by a vengeful boss, there's a simple way to know whether or not you can rest easy. Just have a friend or executive recruiter call them for a reference. 9 times out of 10, your boss will either praise you, or pass the call along to HR. The truth is it's extremely rare for even a nasty colleague to give negative feedback on people who've left their organization. Few people are comfortable destroying someone else's reputation, especially if there isn't some reward for them in doing it.

That said, if the "friend test" does reveal your worst fears to be true, you still have three good options:

This is not your best choice, because it's time consuming, emotionally draining and expensive.

If you had a good rapport with someone besides your boss, let them vouch for you instead.

While legal policies may restrict them from giving you a recommendation, they won't destroy your reputation, either.

Often, when a person leaves a company under adverse circumstances, they can work out an agreement with management stating exactly what the company will tell potential employers about the caliber of their work, and why they left. If you've been fired or terminated because of a reorganization or downsizing, ask your boss for this agreement as part of your severance package. Unless you've done something truly awful, your boss will likely be relieved to have a mutually agreeable account of your departure, especially if it removes the chance of any legal issues cropping up down the line.

Even if you know what your former company will say about you, you may feel more comfortable getting a general letter of recommendation than citing your old boss as a reference. In fact, many job seekers think recommendation letters are better for impressing potential employers, anyway. However, generally this just isn't true. Why? Because a generic letter of recommendation isn't tailored to the needs of a particular company. It's similar to a "one size fits all" resume or cover letter – trying to be all things to all people, and ending up being not much of anything to anybody.

In addition, because a recommendation letter is addressed "To Whom it May Concern," it doesn't have the credibility of a person-to-person phone call. References are more personal and flexible in focusing on why an individual employer would be fortunate to hire you. If your old boss has passed the "friend test," or you got an agreement that they would give you good references as part of your severance package, your best bet is to roll the dice and hand over their phone number to potential employers.

On the other hand, if your departure from your old job was really, really bad, getting a general letter of recommendation might be for the best. In this case, be sure you secure the letter BEFORE you leave. That way, if you wake up at 4am worrying that your old company will break its promise and start badmouthing you, you can just grab hold of that nicely-typed letter on company stationary and let it lull you back to sleep.