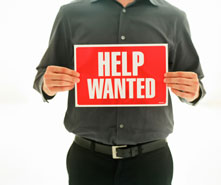 Alan Reisberg was eager to find a more challenging job that would broaden his expertise. But unlike candidates who hope only to move from point A to point B, the New York advertising manager already had point C in sight when he quit his job at a major ad agency after nine years.

Mr. Reisberg was dismayed by the firm's falling revenues and management turnover. But rather than search for another supervisory position on Madison Avenue, he decided to map out a strategy.  Mr. Reisberg, then 34, realized that gaining client-side experience was critical to reaching his career goal of re-entering the agency world at a higher level, but away from the volatility of the Big Apple.

Mr. Reisberg's plan was to spend a few years on the other side of the desk, hopefully somewhere other than in New York, then look for an agency position in the Washington, D.C., area where his wife's family lives. His goal, he says, was to broaden his skills and rise within the industry without compromising his strong family ties.

So when a recruiter called to discuss a marketing communications director's job at a Fortune 500 manufacturer in Texas, Mr. Reisberg – a native Texan – was ready to talk. After accepting the position, he faced a steep learning curve to gain the skills he needed. Adding to Mr. Reisberg's load was a truly killer commute.

"My wife was completing a post-grad program in New York, so for the first six months, I commuted from New York to Austin every weekend," he says. "The opportunity seemed so good, we were willing to make sacrifices. But it tore me up every Sunday night to leave my wife and three-year-old and head to the airport."

Despite his family's eventual move to a rented house in Austin, the 70-hour workweeks and a boss who frequently undermined his authority started taking a toll. "I couldn't make the calls I was hired to make, and it was driving me crazy," he says. "But I decided to hang tough for another year or so to build the new skill sets I needed."

In the months that followed, Mr. Reisberg began networking and returning recruiters' calls, making sure everyone knew of his goal to join a mid-Atlantic ad agency. His plan worked. By the following summer, he'd accepted an executive vice-president's position with a mid-sized Baltimore agency. He's since become co-owner of a D.C. media agency.

"I'm much more valuable now in the industry because of the experience I gained," he says. "I'm really a risk-averse person, but these were opportunities worth taking risks for."

Mapping out a career strategy that includes stops at several employers was once frowned upon by hiring managers and headhunters alike. But corporate America's restructuring has changed attitudes. Not only has the stigma associated with job hopping disappeared, recruiters say, but executives who have executed logical shifts in recent years are considered savvy careerists.

"It has always been difficult to move to the perfect job in one step. But these days, it makes even more sense to think several jumps ahead before making a move," says Douglas B. Richardson, a leadership, communication and career management consultant in Narberth, Pa. who's worn a variety of professional hats, including executive recruiter and lawyer.

Before making a move, have an explicit understanding of what the new position will add to your skill set, experience base, mastery, maturity and personal satisfaction. "Just going with the flow can leave you on the beach," he says.

Apply what Mr. Richardson calls the "resume theory of life," which means having an explanation for each move that will be credible to future employers. Saying "it seemed like the right thing to do at the time" won't wash with skeptical interviewers. If, looking back, you're not sure why you made a questionable job change, create an articulate defense based on your current career plans-and be ready to sell it.

Numerous moves aren't disastrous if they reflect a master plan. But frequent moves where you don't have time to develop new skills raise red flags. To mollify suspicious hiring managers, try to remain in each job at least 18 months, no matter how many more moves you've got planned.

Common sense dictates that you become wiser as you grow older, and that your most recent job reflects what you want to do with your life. "So unless you tell a different story on your resume and in interviews, recruiters are entitled to assume that your last position reflects your ‘product identity,'" says Mr. Richardson.

Be careful that a tactical interim job doesn't create the damning impression that you've decided to step back, decline new challenges and responsibilities, or accept less for the rest of your career. Taking on a lower-level assignment to learn new skills is fine, but be prepared to explain your rationale to prospective employers.

When considering a position, think beyond what you'll gain to what you might be giving up. By transferring to a staff job from line management, for example, you may jeopardize your ability to return to line management once you've developed new talents. "The threat here is that you'll be pigeonholed, and that you'll have to change companies to return to a line job," says Mr. Richardson.

Of course, you must be sure your heart is in the right place. Consider the dilemma now facing a Cleveland-based sales manager. He spent the past 11 years job hopping, primarily in search of more money, and he succeeded. In fact, the manager boosted his compensation package by at least 10% with each move.

The multiple relocations took a toll on his wife and kids, but it all seemed worth it when, early last year, he landed the job of his dreams at double his earnings of just five years ago. He also bought his family's "dream" house not far from old friends. There's just one problem: His new employer, a major manufacturer, is now mired in red ink and rapidly reorganizing. Although he promised his wife that he'd never change jobs again, he may have no choice. And given the lack of comparable positions in northern Ohio, he'll likely have to relocate for the fifth time.

This manager's mistake was switching companies strictly for bigger bucks, with little regard for job substance, security or long-range career plans. "With this last move, I was chasing dollars when I should have been looking for a long-term relationship," he says.

By mapping out a strategy that adds critical skills to your portfolio with a specific goal in mind, your job-hopping adventure can eventually lead to a well-paying, fulfilling position.

"If you can build new skills where you are, great," says Mr. Reisberg. "But you have to be willing to change jobs, more than once if necessary, to fulfill your career goals."