Video Resumes Reveal Too Much

Video Resumes Reveal Too Much 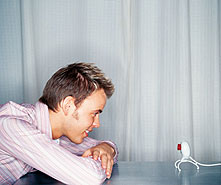 If you want a little entertainment, you could check out a movie or head to the bookstore. But you might have better luck firing up YouTube to watch the latest crop of video resumes. Since the start of the recession, thousands of unemployed hopefuls have posted clips of themselves wooing recruiters, and many seem to have gone mad in their quest for a job. They look tired, they look bored, they look angry. They talk about themselves in the third person. And they don't mind making their private ambitions public. As one candidate told the camera, "I just want to commit my life to, you know, a job that, you know, my life can be committed to."

Video resume aren't new, but as high unemployment drags on, they're increasingly pitched to job hunters looking to stand out. Colleen Aylward, CEO of video service InterviewStudio.com, says she sees a new competitor launch just about every week. The services are popular with career counselors as well. Todd Lempicke, founder of OptimalResume.com, says more than 260 colleges, libraries and job centers will be offering his video services to their constituents, double the number in 2009.

A video resume can run you anywhere from $7,000 (for "executive Web portfolio" packages) to $50 (for guided tutorials that have candidates recording presentations with a webcam). And, of course, many folks take the DIY route. When done right, the results can be impressive: It's a chance to flaunt engaging qualities that even a keyword optimized resume can't capture. But more often, the effort goes horribly wrong.

It starts with the titles. Some job hunters name their production "Hire Me," as if they were inanimate objects in a Lewis Carroll novel. The dramatic opening follows: Candidates introduce themselves with thundering music and space-age graphics. My favorite: the job hopeful who sits in a dark room posing as Rodin's The Thinker, as the words determination, motivation and desire float overhead. And few can resist an evocative backdrop. Candidates shout from windy rooftops, lounge in libraries or pose against a backdrop of shooting stars.

It's interesting to see what folks think will impress a hiring manager. Suppose you really are a "Southern belle with an international mind-set" or that you recently "filled in as host for an open mike in Santa Ana." Does that put you ahead of the youthful candidate who proves his multitasking skills by patting his head and rubbing his belly?

Discreet job hunters post their creations on walled-off recruiting sites, but too many go straight to YouTube, where the whole world can see you in a performance that, much like what goes on in the bedroom, is best witnessed only by the relevant participants. No one looks good trying to sell themselves, and it's hard to avoid coming off as a narcissistic self-promoter. Case in point: the man who rattles on for seven minutes about his skills as an artist, technician, filmmaker, actor, business manager, marketing director, Web developer, graphic designer and, yes, video maker.

Adding insult to injury, some of these spots may never be seen by a recruiter. Headhunters and hiring managers say they avoid the videos, and not just because they don't have time to watch them. Marvin Smith, a recruiter at Microsoft's entertainment and devices division, says they present all kinds of compliance issues with federal anti-discrimination guidelines. Plus, they have no place in a standard applicant-tracking system.

Maybe that's for the best. Jane Howze, managing director at executive-search firm The Alexander Group, says she has yet to watch a video resume, but if she did, she'd likely use it to screen a candidate out. Everyone with a good paper CV gets an interview, she says. Adding video just introduces the potential for her to say, "Oh, wow! What a dorky-looking mustache!" Play it safe and no one sees your bad mustache until it's too late to say no.