The TRUTH About Workaholics

The TRUTH About Workaholics 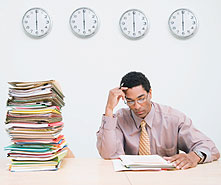 Many people confuse hard-working people with workaholics. Workaholism means that you value work over any other activity, even when it negatively affects your health and family, as well as the quality of your work. On the other hand, there are many people who put in long hours, but still give back to their loved ones and enjoy outside activities when they have free time. These people are hard workers, not workaholics. There is a very serious distinction between the two.

When work becomes all consuming and joyless – that is, you go well beyond what’s necessary and have no other interests or activities – it becomes a negative addiction. Workaholics work because they have nothing else to take its place. Their work addiction is a recurring obsession, and typically joyless.

These days too many people are being labeled (or labeling themselves) "workaholics" just for putting in a few extra hours per week. The truth is that in this poor economy, many of these people are working extra hard just to keep their jobs. Real workaholics have few (if any) outside interests. They let their family lives fall apart. They often have health problems and suffer from depression and deep insecurities. Like any addiction, they repeat destructive behaviors despite knowing that they’re destructive. Many would like to stop, but find it difficult or impossible to do so.

Workaholics should not be confused with people who are simply hard workers, love their jobs and go the extra mile to finish a project. By contrast, a workaholic is someone who constantly thinks about work, and without work feels anxious and depressed. Workaholics are difficult to get along with, because they frequently push others as hard as they push themselves.

Here are some key differences between hard workers and workaholics:

An interesting way of understanding the difference between hard workers and workaholics is found in the research of E.J. Douglas and R.L. Morris, who argue that what we typically call a workaholic, with its negative connotations, may more correctly be understood when we look at that person’s motivation to work. The researchers found that people work hard for four reasons:

While these are the four primary types of hard workers, there is also a fifth type – people who work hard simply because they love what they do. Barbara Woods is Executive Director of Casa Palmera, an organization providing psychological and medical help to men, women and their family members suffering from addictions and behavioral health disorders in San Diego. After an injury, Barbara’s friends suggested she take time off to heal. Her response: “I thought about it, but I just love my job. I can’t wait to get to work. I know I work long hours and people think I’m a workaholic, but I get such joy out of my work. I feel like I’m doing something important. While it’s true that Barbara works up to 80 hours a week, she’s also engaged with her sons, has many friends and is happy and healthy, so she is likely not a workaholic. Barbara simply is one of those fortunate people who works hard because she truly loves her job.

Do you find yourself pulling too many late nights and coming into work on the weekends? If you’re concerned you may be addicted to work, test yourself to see if these six common traits of workaholics apply to you:

Researchers also have found that there are many people who are likely workaholics, but have few of the emotional problems associated with workaholism. The term "enthusiastic workaholics" is used to describe workaholics without health problems who learn the requirements of a job quickly, excel at their work, put great amounts of time into the job and reap the rewards for their work-related efforts. "Non-enthusiastic" workaholics are those who do have health risks and put a great deal of time into work, but get none of the rewards in return. Many of these people work at companies that lack systems of rewarding exceptional work, or have an internal bias against certain types of workers.

If you think you’re a workaholic, there are mental health specialists who can help. Look for someone with professional training, such as a licensed social worker, psychologist, counselor or psychiatrist, who specializes in work-related problems. Research suggests that a cognitive approach to counseling workaholics can be very helpful. This type of therapy focuses on thinking through negative behavior by looking at a patient’s perceptions, premises and beliefs about work. Family counseling also can repair some of the damage done to relationships by workaholic behavior.

Finally, if you’re using alcohol or substances to cope with the pressures of work, seek out a drug and alcohol specialist. The evidence is clear that being a workaholic leads to serious physical problems. Don’t risk your life for your job! Seek help and learn to cope with the need to overwork. The key is to understand that sometimes an obsession with your job performance is more than normal hard work. It’s a real – and dangerous – addiction.

This article is excerpted with permission from Retirement for Workaholics: Life after work in a Downsized Economy, by Morley D. Glicken, which is available from Amazon books