Starting Fresh With an Unpaid Internship

Starting Fresh With an Unpaid Internship 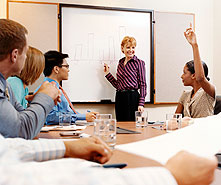 Three months after getting laid off from a small visual-effects company in February, Beki Gibney found a new job – as an unpaid intern. "It feels weird being an intern at my age after five years of working," says Ms. Gibney, 28 years old. "It takes a stab at my pride some days."

Internships – temporary positions that pay little or no salary – are typically designed for college students or recent graduates who want to explore potential career paths. But with unemployment continuing to rise, some older laid-off workers are taking on these stints to stay busy, gain new skills and expand their networks. In the meantime, they continue to job hunt and, in some cases, collect unemployment benefits.

Ms. Gibney says her unpaid summer position at Revel In, a small multimedia production company in New York, is introducing her to documentary storytelling, with which she had no prior experience. The internship provides free lunch and coffee, along with less-tangible benefits. "It gives me the ability to keep my skills sharp and keep myself active," Ms. Gibney says. Before landing the 16-hour-a-week gig, she adds, "I felt guilty and depressed just sitting at home looking for jobs that didn't exist."

Scott Newman, partner and co-founder of Revel In, says initially he thought Ms. Gibney was overqualified. "But she was really clear about redefining where she's going and what she's doing, so we were open-minded," he says. The company hires interns who are skilled and ambitious regardless of their age or experience level, he adds. "We like to work with talented people, to mentor and help them, and it may be a platform for hiring them," he says.

Some internships come with perks. Melissa Pereira, 33 years old, isn't being paid for the 20 hours a week she spends helping CleanEdison, a New York provider of test-preparation and other services, manage its online-marketing strategy. But she is taking its $595 training course for obtaining certification in environmental design free. The start-up is also covering her commuting expenses, among other benefits.

Ms. Pereira was laid off last fall from Sun Microsystems, where she worked for eight years, most recently as a senior global communications manager. While job hunting, she saw an ad on Craigslist for the internship at Clean Edison and applied. "I explained that I wanted to learn the green industry and see if it was something I'd want to commit to," she says.

Ms. Pereira and Ms. Gibney continue to look for paid jobs, with the blessing of their temporary employers. They're hoping their internships, which are listed on their resumes, will boost their odds of success. "It was helpful for us to get somebody of her caliber applying for one our internships," says Avi Yashchin, president of Clean Edison.

Each woman has been collecting about $400 a week in unemployment insurance. "There's no way I could do this if I wasn't receiving unemployment," says Ms. Pereira, who recently gave up her apartment and moved in with two roommates to save $1,600 a month. Jay Zweig, a partner in the employment-law practice at Bryan Cave, says unpaid interns may collect unemployment benefits as long as they are actively searching for work. Bob Riordan, a partner in the labor and employment practice at Alston & Bird warns that federal law prohibits companies from using unpaid interns as substitutes for paid employees.

To avoid legal complications, some employers limit unpaid internships to college students receiving school credit. Last spring, Ashley Biever enrolled in a continuing-education program at the UCLA, primarily to qualify for an internship.

She was laid off in February from a large public relations agency; it was her second layoff since she graduated from Emerson College in 2005. She is now interning at Stan Rosenfield & Associates, a publicity firm for actors George Clooney, Robert De Niro and others. Ms. Biever, 26, says that she isn't sure if she will stay in school when her internship ends in August, but that the roughly $525 she has spent so far on three classes has been worthwhile. She believes the internship will boost her chances of landing a job in the entertainment industry, where many positions are filled through word of mouth.

Potential interns, whether students or not, face one big obstacle this year: There are fewer internships available because of the recession. Employers polled last winter by the National Association of Colleges and Employers said they planned to reduce the number of internship offers by nearly 21%.

To land an internship after working elsewhere, you'll need to explain why you're willing to take a step back, says Constance Dierickx, a management psychologist at RHR International, an organizational-development firm in Wood Dale, Illinois. "You need to talk early about the benefits of hiring you," she says. "It works well to say that you're looking to make a career change or to learn something new. It doesn't work well to say I lost my job and don't have anything else to do."

Put as much effort into your candidacy for an internship as you would for a salaried position, adds Ms. Dierickx. Research employers and study their Web sites to show you are familiar with them and are serious. "Just because a company isn't paying doesn't mean that it's not investing in you," she says. Don't ask if the internship could lead to a paying job in an interview or even after an offer has been made, adds Ms. Dierickx. "You don't want to be too eager," she says. She recommends waiting until near the end of the internship.

Ms. Gibney, who is two months into her internship, says she'd like a permanent position with Revel In but hasn't asked about one. "I don't want them to think it's the only reason I took the internship," she says. "But paying work down the road would be nice."