A Softball Coach’s Lesson on Managing

A Softball Coach’s Lesson on Managing 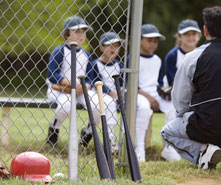 It’s amazing how many great lessons about recruiting and managing you can learn from your kids’ sports activities. For instance, I’ve been helping coach my younger daughter’s softball teams for many years now, and I’ve learned that the approach I typically use to manage a team when times are good don’t fare as well when the going gets tough. Sound familiar? I’ll explain.

At the start of each rec league season, the coaches gather together and attempt to create balanced teams of girls based on a combination of their knowledge of each player and the ratings provided by coaches at the end of the previous season. While nobody’s perfect, we come pretty close when assessing the abilities of each player. And to make sure coaches don’t try to load their teams with top players unfairly, no coach knows which team they will manage until after the rosters are set. While there’s some trading of players following the draft to help satisfy requests for easier carpooling (these are grade-school and middle-school kids, after all), the rosters are pretty firm and the coaches must work with what they have.

Last year, our team was surprisingly good from the start. We had several girls who’d played for many years and continued playing all through the summer on the town’s travel squad. We also had a few girls who excelled at other sports, and were quick studies on the diamond, as well as a few who were determined to work hard to improve their skills throughout the season, and they did. The catch was that we also had some girls whose hearts just weren’t in it. Perhaps their parents signed them up against their wishes, or they lost interest after a few practices when they realized their skill level wasn’t as high as they’d hoped. Of course, the other coaches and I worked especially hard with those girls early in the season and there were some terrific success stories. But after the season got rolling, several of the weaker players started missing practices and even games on a regular basis.

As the season progressed and our winning ways continued, the few less-interested girls became decreasingly committed to the team, and it showed. They’d rarely let the coaches know if they planned to miss a game or practice, and when they came, they often arrived late and left early. All of the coaches did our best to reach out and keep them engaged, but even the encouragement of their teammates rarely had much effect. I’ll never forget one girl with limited skills who frequently complained about not getting more playing time, even though she rarely attended practice and arrived late to every game. After a few innings, we put her into a game at third base, which she said was her favorite position. But after just a few pitches, she was busy drawing pictures in the sandy infield with her shoe, completely ignoring the batter being pitched to just 60 feet away. Thinking what a hard line drive could do to her nose or knee if she wasn’t paying attention, I left her in for only one inning and didn’t let her play that position again. She and two other girls soon stopped showing up entirely. That translated into a team of 11 girls who really wanted to be there, and all 11 got lots of playing time and the chance to bat regularly. To be sure, a few of the girls never mastered hitting, but they had fun and their teammates seemed to be strong enough to score the winning runs almost every game.

As you might guess, the regular season ended with our team in first place. As in most towns, the playoffs followed and a great regular season record was good for a high seed and a first-round bye in the playoffs. The playoffs also required that every girl on each team who shows up for each playoff game must bat, which means that if you have 14 girls on a team, all 14 will bat during a 7-inning game. Well, that’s exactly what happened. The girls who had bailed out on the team during the season wanted to be a part of the playoffs, and we had all 14 in attendance at our first playoff game. The result was a disaster. While many of the experienced girls played their usual game and scored some runs, the other regulars struggled under the stress of the playoffs. And the girls who effectively quit the team but returned in hopes of winning a trophy faired as you might expect. Each one batted three times, and each one struck out each time. That created nine automatic outs out of a possible total of 27 outs over the length of the game. Asking the rest of team to dig out of such a deep hole was simply too much.

It was a sad day for all when we lost 7 to 5. As soon as the game ended, I asked all of the girls to join me and the other coaches out in the outfield away from all the parents. We talked for a few minutes about what a great year we’d had, with many compliments passed around. And the girls joked about having the next night off to watch TV since they wouldn’t have to play again. But it was clear that the regular players were very unhappy with the girls who showed up just to be in the playoffs, especially since they hadn’t shown any commitment to the team through the season.

I learned several lessons last year that I’m applying to this year’s team. The most important is that I’ve focused on working with the weakest girls to help them understand the team concept. I’ve explained that each girl needs to make a commitment to each other, just as the coaches have committed to help them improve their games. I gave that talk at our first practice, and asked each player to make the same commitment to her coaches and teammates that we all were making to her. It seemed like a great exercise, and it also bore fruit: one girl who really didn’t want to be there talked to her parents after the practice, and called me later that night to quit the team, since she admitted she was planning to miss as many games as possible. Conversely, another girl who said at the practice that her parents made her come said that she was ready to commit to improving and attending every practice and game.

Getting buy-in from your teammates at the office may not be as easy as it is with 12-year-olds on a softball field, but it’s still a great way to confirm who will be there at your side when the going gets tough – and who you should seek to replace as soon as the opportunity arises. Remember that with too many strikeouts at the office, the whole team may be looking for new jobs when the day is done.