Should You Quit Your Job to Go Job Hunting?

Should You Quit Your Job to Go Job Hunting? 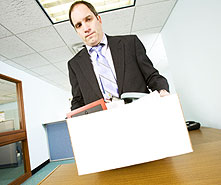 Quitting your job a high-powered job at a time when the unemployment rate hangs at 9.5% sounds crazy. Yet some C-level executives are leaving these days before they line up another plum management spot. Most resign specifically so they'll have time to job hunt. But exiting without another position in the waiting likely will succeed only if you're a well-connected, "A" player.

Recruiters and executive coaches say more executives are making or mulling this move now than compared with the downturn in 2000-2001. That's partly because so many "have the financial resources to do so," observes Peter D. Crist, head of Crist|Kolder Associates, an executive-search firm in Hinsdale, Ill. that handles senior-level hunts for public companies with over $1 billion in revenue.

This gutsy strategy paid off for Erin Ascher when Omnicare Inc. named her vice president of human resources on Aug. 5 after being unemployed for more than a year. She had relinquished the same title 15 months earlier in May 2009 at Prime Therapeutics LLC, a pharmacy-benefit management concern. She says she left to seek the top HR role at a Fortune 500 company. Pursuing that goal while employed would have been "a very time-consuming process," she adds. "Most executive jobs are more than a full-time position."

Similarly, Chris Liddell unveiled plans last November to step down as chief financial officer of Microsoft Corp. and find work elsewhere. Becoming a free agent "can be rewarding," he says. "It allows you time to focus on 'what is next' in your personal career path (and) thoroughly evaluate your options."

Some executives quit without a fresh perch because they're overworked, bored or frustrated by a missed promotion. But you should look before you make the risky leap. Your search may take a year because "being unemployed is still a black mark," cautions Linda Dominguez, an executive coach in Coarsegold, Calif. "You have to be financially secure."

You might soften the financial pinch of voluntary unemployment by requesting severance or partial payment of your annual bonus – or even selling some company stock. The latter is a smart idea anyway, since you'll likely lose unvested stock grants – and leverage to win a full replacement from your next boss. "I haven't been "made whole' with respect to the long-term [cash] incentives I walked away from," Ms. Ascher admits. On the other hand, she says taking her time netted her multiple job offers, which increased her clout during compensation negotiations with Omnicare.

Before exiting the executive suite, you also should assess your prospects "through the eyes of a potential employer," suggests Jane Howze, a managing director at recruiters Alexander Group in Houston. "If you have bounced from job to job, leaving your current position to seek other employment will be considered suspect."

It also helps to line up some job leads ahead of your exit. At the time of Microsoft's announcement, for instance, Mr. Liddell was in early talks about the CFO spot at another big business in addition to GM.

Nor should you quit until you've assembled a current cadre of contacts committed to arranging introductions. Ms. Ascher approached partners of accounting firms that serve targeted employers. She initiated the outreach while employed, then "kicked it into high gear after I left." Helena Wong learned the hard way about the importance of deep connections. For two years, the veteran marketing executive toiled 100 hours a week as global president of a consumer-electronics maker in Hong Kong. "I had no free time to develop new friends," she recalls.

Ms. Wong says she left the manufacturer nearly two years ago because "it wasn't the best fit." Despite an intense job hunt, she has yet to land a suitable global management position – something she partly blames on her lack of time to network adequately before she quit.

She moved back to New York in June. "I am at least getting more traction," Ms. Wong reports.

It's equally important that you avoid looking like damaged goods because you resigned without a fresh gig. That's what happened to a client Ms. Dominguez is currently counseling. The client, a senior operations executive, didn't obtain a single face-to-face interview for 15 months after quitting an East Coast sports-equipment distributor early last year.

The woman's anxiety about her protracted joblessness came through during employer screening calls, according to Ms. Dominguez, who began working with her this June. The executive repeatedly volunteered, "I am good at this. I am good at that," the coach continues. "That comes off as sounding desperate." Ms. Dominguez urged the client to wait for screeners' questions. The woman recently began getting interviews.

Knowing exactly what you want to do next may shorten your search, too. Consider Jim (cq) Lawrence. He announced his departure last December as chief financial officer of Unilever PLC, a consumer-goods giant. He had been seen as a potential contender for CEO of the consumer-goods giant until Unilever hired Paul Polman in 2008. Mr. Lawrence says he left because he wanted to return to the U.S. – and pursue a No. 1 job.

He believed running a public or private company would fulfill his goals of doing something fun, important, financially rewarding and related to his experience. Mr. Lawrence had 120 meetings with investment banks, recruiters, lawyers, private-equity firms and potential employers between early January and late May.

In early June, Rothschild Group named Mr. Lawrence head of its North American arm. "I had not thought I would be a CEO of an investment bank," he remembers. But this opportunity "absolutely hit my four things on the nose."