Should You Apply for a Job When You're Overqualified?

Should You Apply for a Job When You're Overqualified? 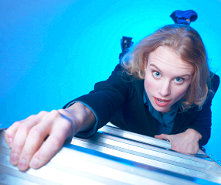 Should you apply for a job when you're overqualified? For most job seekers, there's no easy answer. While the decision should be based on your career goals, many candidates let emotional factors, such as pride, greed or fear, cloud their judgment.

They may worry about having to take a step down the career ladder, or that interviewing for a job when they're clearly overqualified will make them look desperate. Ironically, what seems to be a no-win situation could in fact be a golden opportunity, since when you apply for a job when you're overqualified, the hiring manager or recruiter might actually see you as better suited to this different type of position.

A job can represent a step down the career ladder in many ways, but a combination of less money, a lower-level title and reduced responsibilities are what many job seekers say they fear. Sometimes, however, only one or two of these cutbacks are necessary. When deciding whether you should consider applying for a job when you're overqualified, the best advice is to be objective and keep an open mind. Here are three examples of job seekers who chose to interview for lesser positions (their identities have been changed). Their stories may help guide your next career decision:

Interviewing for a lower-level job might be your chance to show an employer that you're qualified for a bigger job. A resident of San Marcos, CA, Fred Patterson had worked his way up to director of development services for a local municipality. He wanted to move higher, so he sent his resume to a recruiter for an opening as a city manager. He received a rejection letter.

He then sent his resume to the same recruiter expressing interest in a lower-level, assistant city manager job and was called for an interview. During the interview, the recruiter told Fred, "You would have been perfect for the position of city manager."

"I sent in my resume for that, but you rejected me," he replied.

"I guess I made a mistake," the recruiter responded.

The recruiter submitted Fred as a candidate for the city manager's position, which he landed and held for three years. He then went on to become city manager of a larger local town for eight years.

Relying on an employer's promise to transfer or promote you isn't always wise when considering lesser jobs. Debbie tried this approach and it backfired. Now searching for a new job, she thinks she may have to interview for jobs that she's overqualified for again because she wants to stay in the small community that's become her home. She's also apprehensive because of a prior experience:

Ms. Onorato was assistant vice president in institutional trust for a Philadelphia bank until she left in March. Prior to her banking career, she was a stockbroker. At that time, she decided to transfer her skills to personal trust administration, thinking it would be a natural transition.

Since no positions were available in personal trust at the time, she interviewed for an operations position, thinking it would give her "a foot in the door" at the bank. The hiring manager agreed that if she worked for him for a year, he'd help her move into another area. After that, Debbie ended up working for several different banks due to mergers. It took her three years to leave operations and enter the area she wanted originally.

Debbie is now thinking of moving into consulting in banking or a related industry. She may even make a radical career change. This time, though, she's less willing to trust in employers' promises.

"Part of me is afraid, but part of me is much more savvy," she says. "If I do interview below myself I won't fall into these traps again. I had many promotions along the way, but the step I took at the beginning detoured my entire career path."

Taking a step down the career ladder can provide experience necessary for a subsequent career change. Consider Steve Hopper, director of planned giving for a small college in Michigan. Steve received a better title and a larger staff when he accepted another job as executive director of a foundation for a hospital. But while the job was a good career move because it broadened his background, it paid less than his previous position.

To supplement his income, Steve received permission from the hospital's chief executive officer to consult on the side. "I knew that this experience would broaden my level of expertise," he says. "What I didn't know was that it would be a steppingstone to consulting."

After a few years on this arrangement, Steve used his consulting experience to launch his own firm. It was the job that was "beneath" him that gave him the experience he needed to start his own business.

What's the best next step for you to take in your career? The following self-assessments can help you determine if interviewing for a job when you're overqualified is truly in your best interest:

Where do you want to go in your career? Before stepping down the career ladder, it's important to examine your career goals in detail. Then consider whether taking a lesser position will help you get there, says Doug Richardson, a Philadelphia career counselor.

"It doesn't matter if you're interviewing above or below your qualification level," he says. "What's important is [knowing] what will be the best next step for you. If moving laterally or stepping down the career ladder will provide you with the opportunity to gain that skill base or knowledge, take it."

Such a strategy also might make sense if you want to gain international experience or equity ownership, says Shannon Kyle, a New York career adviser. "Some professionals forgo fancy titles to join biotech firms because of the equity ownership opportunity, while sales representatives often take less pay for a shot at management. What's important is the job's description and where it might lead you," she says.

"It all depends on where you're at. You may be on a career track where interviewing below yourself solves a particular need. You may say, ‘I really want international experience. [The job] may be below me, but it's in an industry that is really hot‘," she says.

If you suffered a layoff or quit your old job and can't seem to find a new position, applying for jobs when you're overqualified might make sense to get cash flowing in again.

The key is to weigh your options. Don't take a job that's so far down the career ladder that it will hold you back in the future. Consider mitigating issues, such as an opportunity to learn a new skill set. If taking a lower-level job doesn't make sense, consider doing some consulting while you plan your career trajectory.

To Ms. Kyle, making a career change is, by definition, a step down, no matter how far up the ladder you were in your last job. "Even if you've been a senior-level person, when you change careers, you're stepping down," she says. "But the life experience you've gained will allow you to move up the ranks more quickly than a more junior person."

To improve your chances of being considered for a position, customize your resume for each job application, emphasizing your relevant skills and explaining your reasons for wanting to change careers in the cover letter. You'll have another chance during the interview to sell recruiters on why a perceived step down is really a smart stop forward.