Should You Act on a Workplace Crush?

Should You Act on a Workplace Crush? 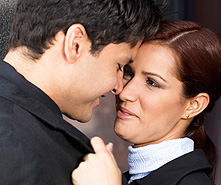 Q: For the past few months, I've been working on a project with a colleague I find attractive. I'd like to ask her out. Should I take the plunge or stay out of the water –Mike, Norfolk, Virginia.

A: That's a tough question with an equivocal answer: Maybe, maybe not. There are a variety of reasons why people choose to involve themselves in an office romance. Some rationales make a lot of sense, while others don't. When you spend 40 hours or more on the job each week, your office mates can start to become your dating pool. On the other hand, if you're looking for illicit adventure, a good time with a bad boy or girl, a new notch on your belt or a romantic relationship with a peer, boss, employee, supplier or client, you should be aware of its unintended consequences.

If you decide to start dating someone at work, your next step should be to investigate your company's policies and restrictions on workplace romance. Some companies prohibit office dating, which means you may be fired or forced to change responsibilities or departments. And even if dating is allowed, office romance can lead to co-worker gossip, complaints of favoritism, low morale, damaged peer relationships, and worse.

Let's take a look at the pros and cons of office romance:

You automatically have a common bond that can extend beyond the office.

In essence, your workplace can serve as a stand-in for eHarmony.com.

If you're in the same company, a location transfer for one will often assure a job for the other.

If you're "going green," want to cut your commuting costs or just enjoy each others' company to and from work, riding together can accomplish all three simultaneously.

You could be fired or forced to change positions to avoid the appearance of nepotism.

When you and your significant other work for the same company, if you get laid off, they may get a pink slip, too.

It spreads like wildfire and can brand you as unprofessional, hurt your productivity, lower morale and dog your career for years.

The aftermath of breaking up can be very uncomfortable, even if it's just having to see your former flame in the hallway at work, or worse, watch them rise up the corporate ladder ahead of you.

There's no guarantee it won't be you.

In fact, consensual sex is not a protection against sex discrimination. Whether you are the accuser or defendant, you career can be irreparably damaged.

Of course, love can't be regulated and can emerge at the office just like anywhere else. One great example involves a corporate economist who was notorious for his chronic procrastination in preparing presentations for the board of directors. His brinkmanship drove his management and peers nuts. One assistant after another fled from his unorthodox style.

Then a female colleague who thought the economist was cute volunteered to help him with his projects. They worked long hours together, and she served as a buffer with other departments and gently pushed him to develop his presentations to fit seamlessly within those of his colleagues. Everyone involved was tremendously relieved.

When the couple announced their engagement, it was counter to company policy. Given the situation, the CEO decided to make an exception and keep the two together as a team. Everyone attended the wedding, and a few years later enjoyed seeing their baby pictures. The moral is that some office romances simply are meant to be.