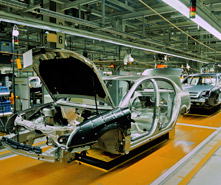 Cities active in the automobile industry were the biggest gainers in managerial hiring in September, according to the new CareerCast/JobSerf Employment Index. St. Louis, Indianapolis and Detroit all added white-collar jobs in September, bucking the national trend as hiring fell 10.1 index points following an an 11.1 point August increase.

The automotive industry has added nearly 60,000 jobs from a year ago, and over 125,000 since bottoming out in July 2009, with September serving as the latest positive month for employment growth, according to the U.S. Bureau of Labor Statistics (BLS).

“The Auto comeback can be seen in the per capita hiring increases in cities with major Big 3 Plants and suppliers,” says JobSerf CEO Jay Martin. “Detroit, Indianapolis, St. Louis, Nashville and Louisville have had a 41% higher increase than the rest of the nation compared to January 2010, and Detroit’s per capita hiring improved an impressive 98% higher than the average for the nation.” St. Louis had the best hiring month in the nation with a 7% increase, while Indianapolis boasted a 3% rate and Detroit added 2%.

Nationally, managerial hiring activity fell following a dramatic August increase of almost 10%. The JobSerf index still demonstrates growth since the outset of the recession, albeit slowed growth. “The level of jobs for managerial positions fell back to where it had been in the two months before August, which is not terrible, but is not signaling a dramatic recovery,” Martin says.

“Election cycles provide uncertainty for the hiring market, but this level of hiring is still strong, though [it’s] not enough to make major reductions in unemployment anytime soon.” September’s decrease is comparable to April, when hiring slowed after sizeable increases in February and March similar to that of August.

So, how do we determine these numbers?

The CareerCast.com/JobSerf Employment Index calculates the number of available managerial job openings each month by surveying wide range of local and national job boards across the U.S, with all results hand-counted and checked for duplication by a team of researchers. What does an overall Index score of 103.5 for September 2012 mean? The Index measures employment activity against a base score of 100, which represents the volume of job openings during the same period in 2008. A score higher than 100 means that there are more available jobs than in 2008, while one below 100 means that job seekers now have fewer opportunities available. Over the past 55 months, the CareerCast.com/JobSerf Index is higher at 103.5 than in September of 2008.

Detroit, Indianapolis and St. Louis were among the top hiring cities in September. Seattle and San Diego dipped. Read more for a complete regional breakdown.