Secrets of an Extreme Networker

Secrets of an Extreme Networker 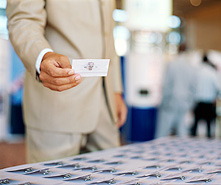 I must confess that everything I've achieved in my business life, including the creation of two highly successful businesses, can be attributed to effective networking. The first business was an outplacement firm that I started from scratch when I moved to San Francisco from Texas in the early ‘80s. I knew no one on the West Coast, but within a few years, my firm was contracting with major companies in Northern California and nationally, outplacing up to 3,000 executives a year.

The second business is my current venture, Executive Capital Partners, in which I represent superstar CEOs and partner them with private equity groups to buy and build companies. An essential ingredient in both of my businesses was (and is) knowing influential people. Executive Capital Partners has been built through relationships that I have developed networking in professional associations of private equity investment groups and other deal makers nationwide.

Both of my firms have been market leaders in their industries. One of the key strategies in building these businesses has been extreme networking...particularly at professional gatherings where I could meet large numbers of people in a short time. It's never too late to learn how to network effectively as long as you follow the basic tenets.

If you're wondering why networking is so important, realize that you've spent your whole life earning an education, learning a profession and doing a great job. Most people think that potential new employers will recognize you for your abilities and potential. You probably think that credentials, smarts and technical skills will carry you throughout your career, so what else could you need?

I have an M.B.A. and 40+ years of real world business experience, and both have been valuable. But career success is not only defined by the stuff you know, but also, WHO you know and WHO knows you. This is what I call building relationship equity.

The reason that superstar executives (like ones I represent) are so well regarded is that they have a following. Everyone in the industry knows them, or wants to know them. How did that happen? Not by being insular and holed up in the executive suite. These execs reached out to others early in their careers, and continue to do it even after they reach the top. They are visible at all the industry functions and on industry boards. They're successful networkers, and that skill has worked to their advantage.

If you're wondering how networking works, consider this chart, which illustrates the Law of Large Numbers as it relates to networking:

The same Law of Large Numbers applies in most other parts of life. The team that wins in sports statistically has more shots on goal, more possessions and more time with the ball. Whether we're focused on job hunting, sports, investments, business development or dating, a lot of good things happen in life if you just keep showing up. The trick is to create lots of exposures, show tenacity; pound, pound, pound and never give up. This is one of the universal truths in life.

How many network meetings have you attended lately? If not many, what are your excuses? Networking can make a big difference in your career, yet surprisingly few people network on a regular basis. When I was in the outplacement business, I asked my outplaced candidates why they didn't attend more networking meetings, and here is what I usually heard:

None of the above are valid excuses. If you really want to advance your career, find a new job or build a business, you will put up with lousy food, people you don't like, crowded rooms and dull topics. You are not going to networking meetings to hear the speaker anyway! Sacrifice a night in front of the computer or TV, or go to bed earlier so that you can get up for a breakfast meeting. Organize your work and your time so that you can attend meetings regularly, and invest a few bucks and your time in your career.