The Rise of Micro Careers

The Rise of Micro Careers 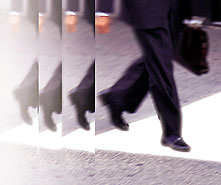 In the past, the common view was that people had just one career. Typically, this one career was defined by a person's occupational field – they were attorneys, salespeople or logistics professionals, for example – as well as their employer – they were lifers at IBM, or Coca-Cola, etc. And no matter the economy, most of these "men in grey flannel suits" truly believed they would spend their entire working lives at one or, at most, two or three different organizations. In other words, they expected to have relatively stable and long lasting careers.

Whether or not this expectation was actually true in the past, however, it is definitely not true today. This Great Recession has changed the nature of our careers forever. I know you don't want to hear that. It's hard enough to find a job today without some putz telling you that the rules of the game have changed. But they have. And sticking your head in the sand won't undo what's already been done.

On the other hand, if you learn the new rules quickly – and figure out how to win with them – you can turn today's difficult job market into a much better one. As a job seeker, you can game this system to capture the upside in a down economy, finding the work you want and hanging onto it.

So, what are these new rules for job seekers? They’re a response to the traumatic devastation of business underway around the world. From GM to Citigroup, from Hertz to Microsoft, employers are shedding jobs en masse – along with the workers who held them. These are not, however, your father's or mother's layoffs. They’re not reductions in force that will eventually be replaced by rehiring in force. They are, instead, reductions in structure. The American employer is becoming smaller, and is going to stay that way.

This organizational restructuring holds several implications for those in the workforce:

Companies will shrink down to a small number of core roles, and hire selectively to fill them. Gone are the days of offering a position to a qualified applicant. Soon only the best candidates will get jobs.

Unlike traditional contract or project work, these will look like permanent jobs, but have a fixed duration and a specific objective. Defined outcome positions may have the same organizational prestige and seniority as core jobs, but they will not be long-term employment.

The life cycle of products and services is shorter than ever today, and soon the staffing requirements needed to manage them will be reduced as well. The kinds of talent needed to execute a business plan in past years will be entirely different than what is needed tomorrow.

So if those are the new rules for job seekers, how can you play by them – and play to win?

The answer is as simple as it is challenging. You’ll have to shift your employment philosophy. As a job seeker, you must accept that the days of relatively stable or long lasting employment are over. From now on, your career will be episodic and short. In fact, rather than a single overarching career, it will be better to think of your work life as a series of "micro careers."

People are living longer, even as the staffing needs of employers grow more temporary.

They may all draw on a common foundation of expertise, but each profession will require a specific – and separate – set of knowledge, skills and abilities.

This continuous changing means that you can no longer aspire to be a complete and fully-formed worker. The old paradigm of moving from novice to journeyman to master is over. In today's knowledge-based economy, only masters survive. So your new strategy must be to act as "masters-in-progress." You must never stop moving toward a better, more capable, more effective version of your best self.

Now, I acknowledge that such incessant self renewal can be a new and potentially uncomfortable way of working. Some employees who have worked hard to get to a certain point in their careers probably would like to coast. But sitting back and enjoying the fruits of your labor is just no longer possible. Today, managing a career is like riding a bicycle – you can coast for a bit, but you’ll have to start peddling eventually if you don’t want to crash.

The evolution of the workplace may be overwhelming, but it’s also not without some advantages. As the traditional stigma against job hopping fades, you can now escape from dull jobs and dead end employers more easily than before. In addition, each new job is a chance to move up, and by starting fresh on a regular basis your mistakes will be less harmful to your overall career. In short, employees may have to stay on their toes, but they will also have more freedom and opportunity than ever before. That is the challenge – and the promise – of micro careers.