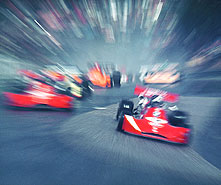 With prospects for new jobs or promotions still looking grim, many workers are struggling to take their careers to the next level. Some, though, have found ways to cope and make themselves more marketable for when companies start hiring again. Indeed, there are a number of ways workers can bolster their resumes in preparation for when the job market ramps up. These include volunteering to gain new skills, building a wider network of contacts and moving into a parallel position within their company.

One of the reasons many people may be feeling like their careers are at a standstill: decreasing voluntary turnover. Between January and November of 2009, 19.6 million workers quit their jobs, fewer than any during that period since the U.S. Labor Department began tracking the data in 2000. What's more, many workers didn't receive raises, and some even saw their salaries shrink. Of 555 large and midsize U.S. employers polled by consulting company Hewitt Associates, 48% said they froze wages in 2009 and another 10% cut salaries.

Once the economy improves, some 60% of more than 900 U.S. workers surveyed between October and November 2009 said they plan to pursue new job opportunities, reports Right Management, a talent and career-management consulting firm in Philadelphia. Meghan Stinton felt her career had hit a wall early last year. After a colleague was laid off in March, the 25-year-old says she had to do that person's job on top of hers, despite not being given a raise or title promotion.

She kept her eyes open, but says she never saw any positions in her field open up above her at the organization. She also looked for outside jobs but couldn't find anything that matched her skill set. "I was pretty much at a standstill," she says. But rather than waiting passively, Ms. Stinton decided to make the most of her situation. She began doing volunteer work in public relations – a field she wanted to move into – for three nonprofits that weren't hiring.

Later, when a manager position opened up in one organization's PR department, she applied by emailing her resume to the director, whom she had gotten to know on a first-name basis from networking. She landed the job in December, increasing her annual income by 20% along the way.

Another way to make yourself more marketable during a career slowdown is to try and transfer to a new position at your company, but without moving up the ladder – the classic lateral move. In late 2008, Kate Pullman, 31, moved into a director position at Prudential Financial after about a year working at the same level but in the human-resources department. "I thought it was better to move laterally than to wait for an opportunity to move up," she says.

Though her salary remained flat, she got to supervise employees with different work styles than those she previously managed, plus she oversaw a company-wide initiative for the first time. She says the move paid off. In November, she was promoted to vice president of staffing operations and received a 12% raise.

However, before moving sideways it's a good idea to research the opportunity to make sure it won't only benefit your career later on, but that you'll also enjoy it. Chris Karel, 35, wishes he took this step. In 2005 he switched to a job in the passenger division of British Airways from one in the cargo area to expand his knowledge of the business. But he didn't research the culture of the company's passenger side and was disappointed to learn that it "wasn't as entrepreneurial" as the cargo area, he says. The following year he quit the company.

Offering to take on extra responsibilities, develop new skills or gain experience in a new area is also a good way to bolster your resume, says Margaret-Ann Cole, a senior consultant at Towers Watson. Just be sure to limit your efforts to a specific time frame such as six months to avoid being taken advantage of, she advises. Also, make sure what you'll be doing will help you move up later on by first running the idea past someone in your target job, a mentor or a career adviser.

If you think the additional work might overwhelm you, see if you can delegate some of your primary duties to a junior colleague who could benefit in the same way, says Ms. Cole. "Managers love when you say, 'Here's my plan to take on more and not leave myself to suffer,' " she says. Finally, consider enrolling in workshops or classes on a subject pertinent to your goals, and once you've finished, add them to your resume, says Dory Hollander, a workplace psychologist.

"It negates the idea that you're lazy and just biding your time," she says. "It shows you're taking charge and no matter what the market's doing, it's not going to stop you from reaching your goals."