Resume Nightmares: The worst things you can do to your resume

Resume Nightmares: The worst things you can do to your resume 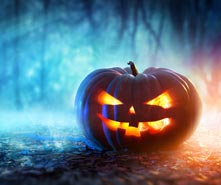 The warm temperatures of summer may still be creeping into our days, but fall is officially here. Not convinced? Just take a look at the displays in your favorite big box store, which have begun to peddle their ghastly wears: masks, wigs and costumes galore. With ghosts and goblins in full frolic, those once midsummer night dreams may shift to nightmares.

While nightmares can leave you waking up in a cold sweat, they dissipate quickly into reality. On the other hand, sometimes the things we do while fully conscious can become living nightmares-take our resumes, for instance. Nobody sets out to craft a macabre resume, yet it still happens all the time. To get us in the mood for All Hallows Eve, here are some examples of mistakes people make that result in resumes from Hades.

Rather than wielding a shiny blade, occasionally a candidate will present a resume that has been truncated beyond anything intelligible. Sure, from a distance it has all the telltale signs that it is going to be a great resume: format looks good, font seems to be reasonable, etc. But then, upon closer inspection it is assembled using nothing but a series of "wow words" and bullets. While a resume should be summary of "you," it should not simply blast the reviewer with a bulleted list of your skills. Instead, consider presenting your qualifications in a manner that clearly showcases what you'll bring to the table for the organization.

Does that spelling look a bit off? Well, that's because it absolutely is. The advent of spellcheck has alleviated many of the pains associated with spelling errors, but it has not been a cure-all. It's not always the death knell for a candidate, but a resume riddled with spelling and grammar mistakes does not bode well. Even if you are using spellcheck-and you should be-please take five to 10 minutes to give it a run-through before sending off. Even better, find a friend or confidante who can go through and help you identify issues you may have become blind to as the author.

On the opposite spectrum of The Slasher is The Blob. These are resumes that are no longer succinct documents that allow recruiters to discern a candidate's qualifications; rather these resumes have become small novellas. Cramming an additional three paragraphs into a resume won't do you any favors in the hiring game. While one page is not always the rule, most recruiters are perusing hundreds, if not thousands, of resumes for any particular open role. If they have to spend five minutes to read line by line in an effort to determine if you're the next best thing, chances are you'll be getting that fateful "Dear Applicant" letter.

Little white lies may have their place in the world-for instance, telling your grandmother that the pumpkin muffins she sent were delicious, when pumpkin isn't really your "thing" is totally acceptable. However, in the case of your resume, do not steer away from the truth. Regardless of the fact that lies or slight exaggerations are caught most of the time, you'd be amazed at the sheer number of resumes that contain fibs. In the end, just be honest.

It's not just the best policy, but also the only one that won't result in loss of job or interview opportunity.

While these nightmares may not leave you quaking in your boots, I'm here to tell you that they're an eerie sight for recruiters and hiring managers. So, during this season of haunts, don't let it be your resume that's doing any of the frightening. I'll depart with this final quote-read it, laugh and then do the exact opposite when considering your resume's clientele. From the late, great Alfred Hitchcock: "Always make the audience suffer as much as possible."

Michelle Kruse is the Recruitment Editor and Content Manager at ResumeEdge, where job seekers go for a well written resume or for help building their own. She has more than 10 years of hiring and recruiting experience for companies such as Novartis and IBM, in addition to a background in coaching and a master’s in leadership development.