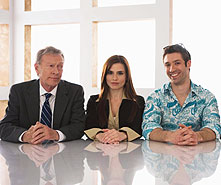 You've heard it all before: "They say your resume should never be longer than two pages." "What will they think if I say I have to limit business travel because of family?" "Do they want you to put your email address on the ad response?" "They'll never hire people from a different industry." "If you're unemployed, they treat you like you're damaged goods."

If you've uttered or even thought about one of these all-inclusive generalizations, you're guilty of imprecise thinking, which may adversely affect your job search and career transition prospects. There is no "they," no secret conspiracy of opinion leaders who define the rules of the game for all players in all situations. There's no safe-harbor of conventional wisdom or quick guide to divining the needs, attitudes and hot buttons of interviewers and potential employers.

The mythical band of decision-makers called "they" is the result of our unthinking attempt to summarize a myriad of wildly differing situations into a more manageable, predictable form. It's like characterizing the stock market as a bull or a bear market. There's no bull or bear, of course, just several billion distinct transactions going on more or less in unison. Sure, if you view all the individual data points from afar, they may seem to blur into broad general trends. But what do such broad and stereotypical generalizations have to do with the activities of individuals?

Suppose one job seeker lucks into a new position on the first day of her search, while a second takes a year to land. The average of the two job searches is six months. Does that mean that the "average" job search – your own job search – should be expected to take six months?

While seeking new employment, many otherwise savvy job candidates suspend their judgment and abandon the practical learning gained from experience in their own unique career paths. Like impressionable children, they may embrace the canons of conventional wisdom – and risk the real dangers of overgeneralization. If the conventional "news" is bad, they may use it as an excuse for passivity or self-limiting behaviors: "They say the recession isn't going to end for four years, so what's the point of trying to buck the trend?" If the message is positive but unrealistic, it may trigger magical thinking – like the fellow who once told me, "They say I should expect to be in the job market one month for every $10,000 I earned. That means I'm sure to be employed by Christmas."

Why do so many bright folks succumb to sloppy thinking? When immersed in the unfamiliar stresses of job hunting, we tend to develop a "task personality" that may be quite different from our own natural operative style. A job-seeker's "game face" frequently assumes two paradoxical characteristics:

In most of us, there is a frail balance between the need to be respected and the desire to be liked. On one hand, we're reminded repeatedly that the job market – especially these days – is a merciless jungle with predators lurking at every turn. Self-reliance is the order of the day. You're told to take care of yourself, because no one else will.

If you turn up the volume on the self-reliance channel and look at yourself in the mirror, you hope to see the grimly determined face of a superbly disciplined samurai. Or, if you are more risk-oriented, perhaps the face of a ronin, an autonomous, mercenary renegade warrior. Everywhere you turn, you hear the message: Take care of yourself! Look out for Number One! Be tough, be hard, be mean.

Be Alone. Whoops. That's the other channel, the one that craves affiliation, inclusion, acceptance and stability. Legions of job seekers report feeling vulnerable and isolated during their journey to reemployment. They think, "I feel so alone, powerless and out of control of my own destiny. I don't want to be a warrior. I want to be part of the team, to be invited inside, out of the cold."

Torn between these conflicting emotional states, job hunters frequently acquire an unrealistic view of their world: It's me against everyone else -- and everyone else against me. Out of this singular orientation comes the dreaded "they think." While creating a hostile "generalized other" may help produce adrenaline that can mobilize your defenses, it also can lead you to lose sight of what's unique about you, your personal search objective, and the nuances of the hundreds of separate interactions that make up a successful job search. Seeing the world in terms of a homogeneous, generalized other creates a counterproductive outcome: it depersonalizes your job search process.

It's not heard to understand why our warrior side wants to depersonalize the enemy. That's the approved military way to ready yourself for the clawing and fighting needed to win without being crippled by remorse or compassion. As one law firm partner put it after unexpectedly being ushered out of his firm of two decades, "It's 'I' before 'we' when you're alone out at sea."

The problem with depersonalizing the enemy in your job search – with turning everyone and everything into a "they" – is that suddenly everyone is the enemy. Sure, competing job seekers are the enemy; they want the job you want, right? But if you aren't careful, your hostility may wash over to your allies and potential employers. Your mind starts spinning aggressive yarns: That headhunter is a jerk, only out to collect his fee. The interviewer is an adversary, throwing me curve balls to try to strike me out. The person making me the job offer is out to trick me into accepting less money than I'm worth or she's able to pay.

Continue Reading There is No They: The Warm, Fuzzy Side