Recognize And Deal With Job Burnout

Recognize And Deal With Job Burnout 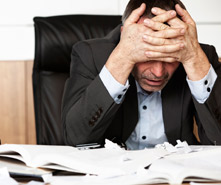 By now, most of us know the signs of burnout: loss of motivation for the job, minor illness, listlessness and feeling down, a bad attitude toward work, needless squabbles with coworkers and bosses, and a feeling that every day we go to work is another miserable, boring day closer to retirement.

What happens when burnout goes beyond these common symptoms and our solutions and the advice of others don’t work? That’s the point at which people are burned up and the symptoms of their burn up can be very serious mental health issues that show themselves in depression, panic attacks, very heavy drinking, use of legal and illegal drugs, long-term health problems, and quitting a job with no thought to what will take its place or who will pay the bills. Burn up has ended more than a few careers and using it as a reason to stop working often results in boredom and a desire to work again when the symptoms subside but with fewer options left.

Christine Maslach and Michael Leiter (Maslach, C. & Leiter, M.P. The truth about burnout. New York. Jossey-Bass, 1997) note that the end signs of having moved beyond burnout and are approaching burn up include the following:

We usually reach the point of being burned up when we try and tough out unpleasant work-related situations without an effective strategy. We ignore the signs of unhappiness, make excuses for the miserable way we feel on the job, justify staying on the job with any number of reasons, and gradually fall into a downward spiral where our motivation to change the situation is gone and, running on fumes becomes running on empty. What should we do about it?

In my e-therapy practice using Skype, emails, phone calls and suggested readings, I’ve worked with a number of burned up people. They rightly diagnose the severe malaise they feel and recognize that it’s become a serious hindrance to their own happiness. Doing something about it is another story.

Ward Evans (his name has been changed) is a 58 year-old tenured university professor. Three years ago, he began to realize that student behavior in the classroom was distracting him. That behavior included texting, Skyping, emails, falling asleep in class, talking to other students while he tried to lecture, arguing with the instructor over grades, eating in class, passing notes, and any of a number of behaviors that are unfortunately common in many American higher education classrooms.

As his distraction and annoyance began to show publically, his teaching evaluations began to decline and he was threatened with a poor overall rating in his next performance review. Many universities require yearly evaluations of all faculty members, tenured or not. If problems aren’t addressed, a tenured professor can be terminated. Ward believed that he would be fired and what became a strong annoyance moved into panic attacks at the thought of going before a class. To lessen his anxiety he began to drink heavily before class, which led to even more serious concerns about his performance.

I referred him to a psychiatrist for a second opinion and possible medication. Antianxiety medication didn’t help and after three months of watching Ward deteriorate even more, the psychiatrist said that he needed to get out of teaching and search for another type of work. I concurred.

The psychiatrist wrote a letter to his university saying that Ward was seriously troubled, and, in his opinion, needed to take a paid medical leave of absence. It was granted for a semester. During the leave I worked with Ward to consider other options. They included seeking a non-teaching research position at his current university so that he wouldn’t lose his benefits, applying for research positions elsewhere including the private non-university sector, and perhaps taking early retirement supported by savings, a university pension, and social security disability.

Not teaching for a semester immediately lowered his anxiety level and the heavy drinking stopped. After several months of getting himself back to his more normal state he went to the university with a plan to do research and to apply for extensive grant monies to pay for them. The psychiatrist did another evaluation saying that Ward’s behavior had returned to normal but that teaching would very likely lead to a return of his panic attacks and heavy drinking.

In an evaluation a year later, Ward is doing well. Was he able to teach again? Not in his opinion, mine, or the psychiatrist’s. At 58, a return of panic attacks and heavy drinking could result in a serious deterioration in his health. Might a more stringent student behavior code in the classroom have saved Ward and other professors who react similarly? No one can say for sure since he was experiencing burnout well before his crash, but it might have allowed a few more years of teaching.

What should you do when you are approaching similar burn up? Here are some ideas that have worked for others:

You may be burned up on a job but it needn’t burn you up for life. Happiness on a new job is possible and, with it, personal happiness is likely to follow.

Take the symptoms of burnout seriously. You can prevent burn up and the grief that goes with it by being honest with yourself. If your strategies to cope with burnout aren’t working and it’s become unmanageable, seek help. Burnout is everything it’s cracked up to be and a complete crash into burn up is avoidable if you take the symptoms seriously and do your part in making changes.

Dr. Morley Glicken is a frequent contributor to Careercast.com. His newest book, Treating Worker Dissatisfaction During a Changing Economy (2013) is available through Elsevier Publishers and Amazon where his authors page can be found at: http://www.amazon.com/Morley-D.-Glicken/e/B002M3KCYM. He can be reached at: mglicken@msn.com.