Quit a New Job Before You Start?

Quit a New Job Before You Start? 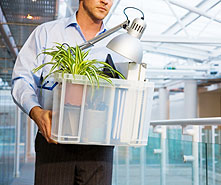 Q: What is the best way to give notice at a job you haven't even started? I am an M.B.A. student who was offered a marketing position in December. I accepted the job, telling the company that I would start in September since I was still in school. Now I have a much better job opportunity in high tech, which I would much rather take. I would have a much bigger impact and turn in a better performance at this second job. How can I tell the first employers that I now want to decline their offer?

A: While they are often disappointed, employers are rarely that surprised when new recruits jump ship before day one, especially with such a long lag time between hiring and the first day of work. It's a situation that is not as uncommon as you might think, especially in the current economy, says Nicholas Aretakis, author of "No More Ramen: The 20-Something's Real World Survival Guide." Still, you'll want to let the company know your decision in a timely manner and with as much respect as possible. "Your reputation is very important, and you never know when you will run into people again," says Mr. Aretakis.

There are a couple of precautions to take before letting the original company know that you have changed your mind. Carefully consider your decision and whether the new opportunity is indeed as good as it seems, says Emily Bennington, author of "Effective Immediately: How to Fit In, Stand Out, and Move Up at Your First Real Job." "Take the time to meet with your potential new boss, gain a clear understanding of your responsibilities and, most importantly, have a signed offer letter in hand before giving notice," she says.

Once you have established that the move to the second company is the right one, you have two options: to write or call the hiring manager at the original company. Email is often subject to misinterpretation and not something Ms. Bennington would recommend in this situation. "Picking up the phone is not only the courteous thing to do, but it demonstrates a certain professional maturity as well," she says. "Best of all, it allows you to gauge the other person's reaction on the spot so you can respond in a way that preserves the relationship which, after all, is the ultimate goal."

Whether in phone or letter form, you'll want to keep your message succinct. Simply explain that you have been offered another opportunity, which is more in line with your long-term professional aspirations. Mr. Aretakis recommends apologizing - or at least acknowledging - the inconvenience that your decision could cause the company. Follow that up with the fact that you wanted to provide as much advance notice as possible so that the company could resume its search with alternative candidates.

You'll want to prepare yourself for a host of possible reactions from the hiring manager. He or she might want to renegotiate or hard-sell you on the position or could appear quite upset with you, says Mr. Aretakis. It will be up to you to hold your ground. "You have no legal obligation to work for them, and you don't want to make the engagement personal," he says. "Keep it short, polite and professional."

Even though there could be some hard feelings at first, it's better that you go with the company in which you will be the best fit, says Sarah Spearing, human-resources director at global public-relations agency GolinHarris. "Ultimately, the company will want to have an employee who is happy and a perfect fit for the position," she says.