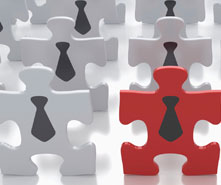 What would you do if you were approached by a secret online group of workplace activists who said vulture capitalists had rigged the job market against you? And, how would you react if they also told you that the only way to protect yourself was to practice “economic disobedience?”

What’s “economic disobedience?” It’s the practice of refusing to accept the boxes employers try to put us in. These boxes limit our sense of possibility – our hope for the present and the future – and, as a result, they undermine our ability to achieve success.

The first box is this belittling notion that people in transition are “job seekers” and that those who work for a company are its “employees.” They aren’t. They are “people of talent,” because talent is like our opposable thumb. It is an attribute of our species. Talent is the capacity for excellence, and it is what defines us as human beings.

The second box is this equally as belittling notion that people’s performance is locked into a “normal distribution.” Some will excel, some will fail and the majority will do O.K.. That’s how employers rig their performance appraisal systems because doing so minimizes what they have to pay their workers.

There’s just one small problem. The normal distribution was developed to describe the behavior of data, not the contribution of people. Every worker possesses the ability to deliver superior performance on-the-job. It’s up to them to bring their talent to work, but it’s also up to their employers to get out of the way.

Finally, the third box that employers try to stick us in is this belittling notion that we are their property. What do CEOs routinely opine to all who will listen? “Our employees are our most important asset.” They think we’re just another means of production with a couple of DNA strands.

And, that’s exactly what we’ll be if we don’t take charge of our own careers. If we don’t become as expert at career self-management as we are at our profession, craft or trade. Because here’s today’s unavoidable reality: there is no such thing as job security any more. Given the tectonic shifts underway in the global marketplace, employers can’t tell what kinds of workers they’ll need six months from now, let alone two or three years down the road.

So, how do we protect ourselves?

Create “career security” – the ability always to be employed and always by an employer of our choice. That’s why I titled my novel A Multitude of Hope. Because hope is what happens when we replace employers’ boxes with our own commitment to finding, developing and delivering our talent on-the-job. We rediscover the power and promise of the American Dream.

To read an excerpt from A Multitude of Hope, and to order the book, visit www.AMultitudeofHope.com.

Peter Weddle is a former columnist for The Wall Street Journal and the author or editor of over two dozen books.