The Office Hook Up: Secrets Are No Fun…Unless You're Part of One

The Office Hook Up: Secrets Are No Fun…Unless You're Part of One 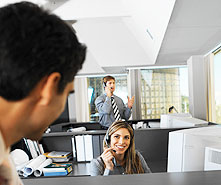 Romance in the Workplace

Over the summer I met up with one of my fellow students for what I thought would be a normal catch-up lunch – complaining about customers, groaning about our respective bosses, and griping about how we hated being broke as a result of our unpaid internships. However, once I was settled at my table (and checking my watch – where was she?), Linda H. breezed through the front door of the restaurant. Her dress was wrinkled, her hair was slightly mussed, and her big blue eyes were twinkling. She swayed her way through the tables, and sat down across from me with an impish smile.

Linda (not her real name), who had been spending the summer interning at a prominent local record label, leaned across the table, beckoning me closer. "You have to promise not to tell anyone."

"Well…" Linda looked over her shoulder, then whispered, "I may have spent all last night with the bassist from that new band that's recording at our studio."

She raised a finger to her lips, and grinned. "It's completely okay. Because no one is ever going to know about it."

Good Advice…If You Were to Take It

We've all been told what to do regarding office romances – trite sayings about pens and company ink, and not taking your work to bed with you haunt employees from the moment they step off the elevator on their first day. Spotting used-to-be workplace couples is easy, too, as they're typically the ones glaring at each other across a boardroom, or avoiding each other in the kitchen. It's a safe bet that no one aspires to become one of these office clichés, the star-crossed co-workers who wind up as the subject of gossip around the water cooler. After all, who would want to be known for having an embarrassing fling, rather than being a great presenter or a successful sales rep? It just seems like common sense that the workplace is not an appropriate dating pool.

Of course, this counsel is all well and good – at least in theory. But how often do we really take this kind of advice? Simply put, the problem is that no matter how formal and corporate the setting, workers are still human beings. Spend all day, every day with the same group of people, confined in the same office, and it's hard not to notice when one of your co-workers is a babe. And although you may walk past this office hottie's desk each morning with nothing more than a normative "Hello," or even stop to engage in a little innocuous small talk, there's still that temptation lurking underneath to ask them to meet you in the supply closet in five minutes. Whether you act on it or not, you can't deny this kind of basic attraction – even if the person you're attracted to happens to be your boss.

Office romances can start in any number of ways – at a company party, for example, or when a group of colleagues go out for happy hour drinks, or even when team members are sent on a business trip together. A few sips of liquid courage is usually all it takes to get past the barrier of office formality, and then instead of just being a good-looking suit from three cubicles over, your colleague becomes a real person. Maybe you learn that they have a favorite drink, or a quirky story to tell, or even notice that their shirt is unbuttoned a bit lower than the office dress code permits. Then, before you know it, you're both heading off to some dark corner, apartment, or back up to your hotel room – and not to practice that sales pitch you've been working on. Jump to the next morning, and suddenly you've got yourself a brand new secret.

There are many ways you can handle things with a colleague after a workplace hook-up, but three are especially common: You can pretend the whole thing never happened, leaving you to endure awkward smiles and nervous conversations whenever the two of you have to work together; you can act like mature adults, acknowledging that what happened was just a one-time thing and trying to be civil about it; or, you can keep doing it. And once again, while the prudent move would likely be to deal with things frankly and get on with your career, more often than not amorous co-workers instead wind up going back for more.

If office romances are such a bad idea – so bad that it's an unspoken rule that they must be kept completely secret – why do we keep doing them? Why did Linda jeopardize her future by keeping very close company with a certain musician, who was a client of her company? According to Linda, who couldn't stop smirking coyly throughout our lunch, it was "the most thrilling thing I've ever done."

This isn't just true for Linda. For many employees the office can a mundane place, and having a massive secret, even one that's potentially career-threatening, can provide a charge that gives going to work a whole new allure. Instead of just spending her internship attending meetings and making phone calls, Linda now had someone to brush legs with under the table and meet in the copy room for a few minutes during the day. And the best part? No one had any idea what she was doing.

Why It Works…and Why It Doesn't

These kinds of clandestine rendezvous with an office-mate can be both good and bad for you. On the plus side, you're having fun – the secret excitement can set you on a high that makes work more like a game, since you have someone to send sexy texts to during a meeting, or "accidentally" brush up against when grabbing a morning cup of coffee. However, an office romance can have other advantages besides just the illicit thrill. When you date a co-worker, you have a partner who completely understands a unique and vital part of you: Your professional life. They know exactly what you're talking about when you voice frustrations about a client, or can sympathize with your feelings about your boss. It's a kind of connection that many normal couples struggle to find.

On the other hand, when it comes to these secret relationships, there's a lot of damage that can be done as well. Of course, typically the main worry among workplace lovers is that their secret will get out. This is definitely a legitimate concern – hopefully you've been wise enough to choose a discrete partner – but equally important is the risk that your work performance may suffer. Just because you're sharing a drink (or a bed) with someone you work with doesn't mean that you can't treat them like any other colleague. That promotion you're both up for? Chase it. That asinine point they made in the meeting? Disagree with them. All's fair in love and work – regardless of how important your office romance may feel, succeeding in your career should still come first.

As much fun as a secret workplace fling can be, the odds are that your relationship is not going to end happily ever after with a romantic wedding, like it did for Pam and Jim on The Office. So if you want to avoid months of awkwardness when things don't work out (or worse, dismissal if you're caught violating company policy), it's best to enter into any relationship knowing that the office is not a place to find "the one," and agree to stay casual. The best way to survive an office romance with your career and your reputation intact is keep quiet, keep smiling, and make sure that when it eventually ends, it ends peacefully.

This is what Linda discovered as her workplace relationship came to a close. When her secret fling stopped returning her calls, she made amends and endeavored to act totally professional. But that isn't to say it was easy – apparently she had thought things were a little more serious than her partner had. But in the end, she was able to continue going to work and building a foundation for her career, unlike a coworker of hers from the same department, who was caught in a similar situation a few weeks later and promptly lost her internship.

So while the dangers of engaging in an office romance are very real, as Linda illustrates, sometimes a secret fling can be fun – just make sure that you can keep it secret, and keep it as just a fling.

Carly MacLeod writes the Romance 101 column for Washington University's Student Life Newspaper, where she is a junior majoring in English Literature. She aspires to go into journalism, and was recently featured as a guest on NPR's All Things Considered to discuss the Thanksgiving "Turkey Drop". Her column can be read on Student Life's website: http://www.studlife.com/scene/romance-101