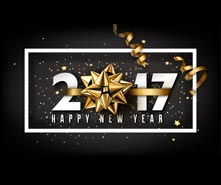 Congratulations, you made it through 2016! A new year has arrived, and you are ready to pursue that career change you always wanted.

Unemployment is the lowest it's been since before the Great Recession, the Dow Jones Industrial average has reached record heights, and consumer confidence is climbing. Plus, you have decided to make 2017 the year you find a new career path.

You and the roughly 20 million Americans who resolve to find a new job any given Jan. 1, anyway.

We discussed the crowded landscape that comes with a resolution job search. If the thought of heightened competition scares you, don't panic.

At times of economic and job market strength, as the U.S. has experienced for the previous four years, hiring does not taper off with the arrival of winter. In fact, January/February/March hiring of 2013 and 2014 actually outpaced the preceding holiday seasons. Hiring in the winter months every year since 2013 has also been strong.

In much the same way a job seeker resolves to find a new position, organizations begin the new year with goals of finding new staff. Hirers who spent the holidays handling end-of-year responsibilities tend to get refocused on filling positions.

Still, there's an understandable anxiety that comes with the flood of resumes other job seekers send out commensurate with the calendar flipping. Fear not.

Much like the gym clears out sooner than later of the uncommitted resolution-setter, the true reward in a job search resolution comes from investing in the long haul.

While recent winters have been strong seasons for hiring, historically, spring marks one of the biggest upticks in hiring on any given calendar.

Spend these first few weeks after making your career resolution to perfect your cover letter, visual CV and/or resume. There's no rush to get your material in front of a prospective employer -- especially if it isn't all top-notch.

Monitor job openings in your field regularly. The database at CareerCast.com allows users to sort by profession, skill sets and location, making it easy to compile a specific list of prospects.

If you're holding out for a very specific job, keeping tabs on similar positions provides insight when that perfect position does come open. Know the pay trends going into that interview to maximize your potential.

Remember, you don't have to land that new job in the first month of 2017. You've got 365 days to fulfill your career resolution.