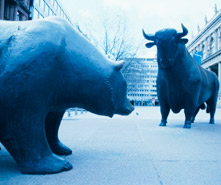 The American stock market’s record-setting growth so far this year should translate to job growth through 2013 if historical precedent holds true to form.

The Associated Press examined past Dow Jones Industrial average (DJI) record highs and the trends that ensued. Typically, new peaks in the market have sparked years of growth that are reflected on the employment landscape.

The 1954 stock market peak, for example, was a prelude to tremendous job growth over the next two years. Unemployment before the market peak was just below 6%, per U.S. Bureau of Labor Statistics archival data, and dropped over the next three years.

There was even more dramatic job growth following the market peak of 1963. Unemployment in 1961 was 6.7%, and fell to 5.2% when the DJI set a new record in 1963. That new milestone continued for the next three years, and employment grew each year until 1970.

While such a benchmark might seem far removed with the U.S. in its fifth year of trying times, consider that the unemployment rate in 1992 was 7.5% -- very near where it currently resides.

History does point to more prosperous days ahead for job seekers. The question is where to look for these budding opportunities. It stands to reason that if stock market strength and job growth correlate, the industries flourishing in the stock market would also thrive in the job market.

Indeed, industries on the sharpest incline in the stock market include those in healthcare, which Business Week estimates gained 11.57% value in the last month of 2012 and first two months of 2013. Healthcare unemployment is the lowest among all job sectors, and BLS projections for many health fields are robust. Included is occupational therapist, a field expected to grow 33% by 2020.

Industrial stock growth is up over 14% in the same three-month snapshot, coinciding with manufacturing employment improvements. An Orange County Register report says that a retiring workforce in the manufacturing sector will open opportunities in the years to come, and employers are upping their aggressiveness in reaching out to college students.

The highest DJI growth, according to Business Week, is in the financial sector, which is up 15.67%. Some of the highest growth careers per BLS estimates are in finance, including personal financial advisor (32%) and market research analyst (41%).