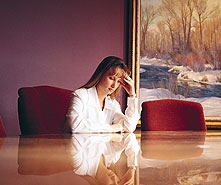 While starting a new job means learning the ropes at an unfamiliar place, for those faced with a sudden role shift within the same company, the move can be even trickier. But it's happening more and more these days, as companies downsize and responsibilities shift. Whether you're moving from one internal job to another or suddenly answering to a new boss, you need to take steps to avoid the pitfalls of office politics and work overload.

When moving from one job to another in the same company, you can easily get stuck with twice the work. You might be eager to start the new job, but Rick Brandon, author of "Survival of the Savvy," advises sitting down with your bosses to reach an agreement about how the transition will be handled. Who will take over your old role? What will your new job entail? "Negotiate time frames for the new job," says Mr. Brandon. If you're asked to take on work in addition to what you do now, ask for a priority list and find out who you will report to for the new responsibilities.

Just because you're still in the same company doesn't mean you'll be playing by the same rules. Take the time to learn how things operate in your new work situation. "It's easy to think, 'I know the company, I've been here for 20 years,' "says Erika Andersen, author of "Being Strategic," and founder of Proteus International. "It's really important not to assume that it's the same." While you handed in monthly reports and held monthly meetings in your old job, a new manager may expect you to report your progress weekly, or meet more frequently. Be sure to find out the particulars of the departmental culture.

Reorganization usually leads to fear among employees, whether it's a favorite co-worker whose place you'll be taking, or former peers who now report to you. You'll be bringing whatever old baggage you have-and dealing with the worries of new colleagues, says Mr. Brandon. Don't be surprised by initial push-back from co-workers who may see your new role as a threat. Be open with your colleagues about your role and how it fits into the group.

Consider in advance what might happen if you're needed back in the old job or role, says Mr. Brandon. Will your new manager be on board with the idea? Can other colleagues or outside consultants help if a crisis hits and your hands are full? "Make sure you run interference for yourself," says Mr. Brandon.

While you may have a new set of colleagues, preserving relationships with old co-workers and managers is important, particularly in such a volatile work environment. Stop by to say hello or invite a former boss to coffee. "There's so much reorganization," says Mr. Brandon. "You might end up back with those people."