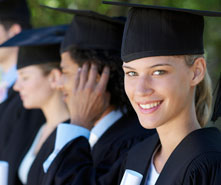 “You’re hired” is the phrase new college graduates are longing to hear. And for the first time since the economic recession began in 2007, the Class of 2011 can look forward to hearing it in abundance.

U.S. companies are hiring in greater numbers than they have in several years, says Mary Anne Thompson, founder of Going Global, the leading provider of country-specific employment information. “Hiring projections are up nearly 20% from last year, and the Class of 2011 can expect employers from nearly every sector to be interested in hiring entry-level employees with bachelor’s degrees.”

While full-time jobs and internships are available in most sectors, this year’s grads will find the most job opportunities in oil/gas extraction, chemical (pharmaceutical) manufacturing, computer/electronics manufacturing, and the finance, insurance and real-estate (FIRE) sectors.

New graduates may find the most promising job opportunities in the Northeast, where hiring projections are up more than 25% from last year, according to Going Global. While government employers dominate this region, jobs also are plentiful in the FIRE sectors, as well as in accounting and engineering services.

“For example, Philadelphia is one Northeastern city rising out of the recession,” Thompson says. “It was hit hard, but certain sectors, particularly law, education and health care, have bounced back quickly.”

Hiring expectations in the Midwest are up approximately 20%, according to Going Global. “Minneapolis-St. Paul is one Midwestern city that is very healthy right now. We’re seeing a surge in health care hiring, along with an abundance of jobs available in pharmaceutical manufacturing, computer/electronics manufacturing, the FIRE sector and accounting services,” Thompson says.

In the West, hiring is up a considerable 19.3%, while the Southeast shows the least opportunity with only a 7.9% hiring increase from last year. While some cities were hit hard during the economic downturn, others with robust industries, such as the IT industry in Seattle and the life sciences industry in Raleigh, have been able to provide more consistent job opportunities throughout the recession.

Nationwide, the highest demand is for graduates with bachelor’s degrees in engineering, business and accounting, says Thompson, followed by those with degrees in the medical field and communications.

The job market for new college graduates is expected to remain stable in the future. This means that graduates of the Class of 2012 and beyond can relax a bit, take a deep breath and continue to work hard on the skills employers are seeking.

Check Out Where the 2011 Jobs Are for Grads and Which Industries Are Hiring!

Going Global founder Mary Anne Thompson is an internationally recognized expert on global careers. A former White House attorney, she launched Going Global while living as an expat in Stockholm, Sweden. Today, Going Global is the leader in providing country-specific career content targeted to professionals seeking to begin or change careers both at home and abroad.