A New Career on the Road

A New Career on the Road 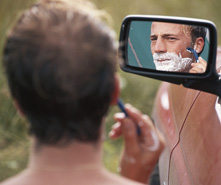 Giving up a profitable psychology practice in midtown Manhattan to play music full time may sound crazy. But for Lucy Kaplansky, traveling the country with guitar in hand is just what the doctor ordered. "I was in therapy when I had a life-altering revelation," says Dr. Kaplansky, 46, who spent much of her youth playing folk music to rave reviews. "I was explaining why I didn't want to become a professional musician, spending so many days on the road, when I realized I was lying to myself. That (kind of) life is exactly what I want, and from that moment on, I knew I needed to sing full time."

So she reduced her patient load, signed with a booking agency and started performing on weekends around the Northeast.

"I was weaning myself off psychology," says Dr. Kaplansky. "When I realized I couldn't do both anymore, I closed the practice." Now she travels extensively, performing four or more nights a week. "I worked really hard earning my degree and license, but psychology was a consolation prize for me, and I needed the first prize."

If your career is speeding down a path that lacks joy and fulfillment, perhaps it's time to change course. You won't be alone, say career counselors, who are besieged by distressed baby boomers longing to try new fields. What's different about Dr. Kaplansky and others like her is that their career dreams include the search for freedom, independence and, most important, a life on the road.

"I grew up going on long family trips, and it's still exciting to me to travel the countryside," says Dr. Kaplansky. "Although there are social activities in every city I play, there's lots of time to be alone, too, which I really like."

Don Asher is another professional who decided that hitting the road was more rewarding than meeting client demands and deadlines. "I traveled a lot in my college days, and I really loved being alone and on the road, says Mr. Asher, 49, who says he'd visited 49 states by the time he was 25. "But then I settled down in the Bay area and started a family."

As his consulting business prospered, Mr. Asher says he solicited occasional speaking engagements, primarily on college campuses. "Then I wrote a book about getting into graduate school, and created a lecture series on the subject." That fall, he accepted more than 40 speaking engagements, and his return to a life on the road reminded him of all he was missing.

"When you're traveling, most of your time is spent being alone. You really only work two to three hours a day," says Mr. Asher. "I love that quiet time. No one's calling in sick or complaining about a jammed copier, and I have time to visit great museums, eat at neat restaurants and do whatever the local people tell me is worth doing."

During the preceding years, Mr. Asher's marriage had faltered. So when his wife decided to relocate to Seattle with their daughter, he was free to close his business and expand his speaking schedule. He's now managing partner of Asher Associates in Reno, Nevada.

"Traveling put an additional strain on my relationship with my wife and daughter, but it wasn't the reason for our divorce," he says. "Now that they've moved, I feel totally guilt-free about traveling, and surprisingly enough, it brings me into close contact with my daughter at times when I wouldn't have been with her otherwise."

For most dissatisfied employees, quitting a job to hit the road is the basis for great daydreams, but that's as far as it gets. "People who have this fantasy usually want to escape something simple, such as office politics or a terrible boss," says Arlene Hirsch, a Chicago career counselor and author of "Love Your Work and Success Will Follow." "They're not really ready to leave their spouse and kids for weeks at a time, or shift careers in such a dramatic way."

But there are ways to fulfill your need to travel without turning your career on its head. "First, try to negotiate for more freedom in your current job," says Ms. Hirsch. Options include taking over a distant account that requires frequent visits, or attending trade conferences that had been handled by others. "If you can't toss convention to the wind, it's a realistic compromise," she says.

Technology may also provide a solution. If your boss is amenable, create a virtual office that allows you to fulfill job responsibilities as you travel. If you need to spend even more time on the road, software programs can help you manage weekly housekeeping duties effectively. "I pay bills, send and receive email and deposit money online," says Mr. Asher. "It all takes about an hour a week."

If negotiations with your boss fail, talk with employee relations or a trusted vendor about shifting into a position that requires lots of travel, such as becoming a consultant, sales rep for a large territory or seminar leader. Making a lateral move often is easier than convincing a new employer to take a chance on you, says Ms. Hirsch. "And you won't have to give up a steady paycheck."

That approach worked for the president of his family's optical firm in suburban Chicago. He loved driving, so when back-biting among his siblings and relatives became excessive, the president negotiated a job as a manufacturer's rep with one of his firm's suppliers. He moved to California with his girlfriend, and even though he's in a lower-level position, he says he's thrilled to spend his weeks visiting clients up and down the West Coast.

If you can't find an alternative to jumping ship, be ready to piece together a new career that provides the travel time you seek. "Test the waters by starting a business on the side," says Ms. Hirsch. Use weekends and vacations to fly or drive to clients, until growth in your side business forces you to quit you full-time job. This approach minimizes risk while ensuring that you're ready for a life of motel rooms and fast food.

"Initially, getting away from it all sounds very appealing, "says Ms. Hirsch. "But it can get old after a while and lose whatever glamor it held for you."

Finding the perfect balance between travel and home is the goal of many wanderlust career-changers. "Once I closed my practice, I started spending at least a third of my life on the road, and I love it," says Dr. Kaplansky, whose most recent album is "Over the Hills." In a typical week, she'll spend Thursday driving to New England, Ohio or Virginia, do shows each night through Sunday, then head home for a few days on Monday. This scenario is repeated weekly, unless she's booked to perform in California, Texas or a neighboring state. The she flies and spends a week or more away.

While trading a 9-to-5 job for such an erratic schedule may seem possible only if you're single, Dr. Kaplansky is married. Her husband is a professor at New York University, and not only does he support his wife's newfound freedom, he's co-written several of her songs.

"It's hard being married and away from my husband," says Dr. Kaplansky, "but I'd hate to wake up 30 years from now with regrets because I didn't try."