Never Too Late to Find Your Perfect Career

Never Too Late to Find Your Perfect Career 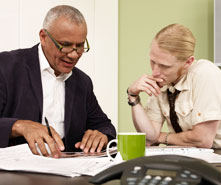 How do you know when you’ve found the perfect job? Is it when you enjoy your work so much that you can’t wait to start each day? Or when you job pays so well, you can afford many of life’s luxuries? Perhaps you’re dedicated to a career helping others, which brings all the fulfillment you need.

If you’ve reached such a high level of job satisfaction, consider yourself very lucky. The vast majority of working Americans aren’t so happy. In fact, a recent national survey found that less than 30% say they’re completely satisfied in their positions, with most admitting that they’d change jobs tomorrow.

Unfortunately, the world is full of people who embarked on promising careers, only to discover years later that they made the wrong choice and are now profoundly unhappy. They say they’re trapped by upside-down mortgages, or tuition bills, or simply can’t find a better position in today’s tight employment market. And even if they’re willing to try, many argue that the demands of learning a new field are too difficult to overcome. So they settle for less, do everything they can to make their weekends more fulfilling, and count the years until retirement. It’s a sad way to live.

If you’re stuck in a situation like this, you can make light of it of course – maybe with a funny bumper sticker or desk calendar. You may feel thankful just to have a job at all, and elect to value your steady paycheck over career fulfillment. Or you can break away from the pack and take action. That’s what Tom Reid did, and he’s never been happier.

As a sheet-metal worker in Local #25 in suburban New York City, Mr. Reid enjoyed shaping structures with his hands, as well as the camaraderie he developed with fellow union members. But as more and more manual labor jobs have been outsourced in recent years, lack of stability has become a constant worry.

“Sometimes you do well in sheet metal, and other times you’re jobless for many months,” Mr. Reid says. “It was very unpredictable.” But rather than hang out at the union hall between jobs, Mr. Reid used the downtime to pursue his childhood hobby: collecting baseball cards and comic-character items. When funds were tight, he’d list new items on his eBay store, or set up booths at baseball card shows and comic conventions to earn a few bucks and add to his collection. But he never considered leaving his true craft.

“A lot of the sheet-metal jobs were very interesting and when I was younger, I liked the cocky, macho image of the profession,” he explains. “Then, when I was out of work, I could look for collectibles.”

But Mr. Reid’s life changed dramatically as the value of many collectibles soared. Items he’d bought for a dollar here and five dollars there were starting to fetch hundreds. Eventually Mr. Reid decided to pursue his passion full time, expanding his online presence and even opening a retail collectibles store in Nutley, NJ. “I decided that something I loved as a kid should become my business,” he says.

When asked why other sheet-metal workers he knew who also collected didn’t follow his lead and switch careers, Mr. Reid says fear was the greatest barrier. “Most people wouldn’t take a shot because they’re afraid of not being able to pay the mortgage or feed their kids, even if they’re unhappy with their 8-to-5 life. But unless you try, you’ll never get out or be successful at something you really enjoy."

Whether you’re an early retiree not ready to leave the business world or an unhappy mid-careerist eager to try something new, it’s critical that you research career fields to determine where you level of satisfaction will be high. If you daydream about becoming an open-road truck driver because you imagine having great freedom to roam the highways and take in the sights, you’ll be rudely awakened by the tight deadlines and incredible long hours logged by most truckers. Or if leaving the volatile corporate world to sell software is your idea of a stable environment, think again. Turnover among salespeople is sky-high, and only truly savvy sales pros even come close to earning six-figure incomes.

Before making a switch, however, be sure that the job you have now (or held most recently) isn’t what you really want after all. Perhaps it’s just specific parts of your job that need changing, not the job itself. A bad boss or heavier workload after a company lays off staff can turn even the best position into a horrible. A lateral transfer into another department or company location might make the difference. Even volunteering for new duties may solve your dilemma, since you’ll be exposed to new projects and new people.

To make certain that a career change is really right for you, follow these three steps:

Determine your real priorities by asking yourself questions like “what would I do if you only had six month to live?” When considering career options, trust your gut.

For example, if you’re in advertising, picture how the products you promote help consumers, or how the products’ increased sales helps to improve the economy and create jobs.

Take time to celebrate your accomplishments and take pride in the quality of your work. Remember how great you felt when you earned promotions and awards. Can you do something currently that will generate these good feelings again?