Is Multitasking a Myth?

Is Multitasking a Myth? 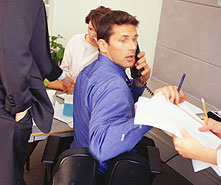 When the cardiologists Meyer Friedman and Ray Rosenman were researching personality types in the 1950s, they coined the term hurry sickness to describe the tendency to perform tasks quickly and to get flustered when encountering delays. By 1959 they had refined this to the now-classic term type A personality, a key element of which was a "harrying sense of time urgency." Nowadays, this has a familiar ring to all of us. That's why some folks say we live in a type A culture, or an accelerated culture. This acceleration has also affected the adjectives we use to describe the world. The rat race is no longer merely fast paced; it's amphetamine-paced or even meth-paced (meth is short for the stimulant methamphetamine).

How do we keep up? We try to do several things at once. A New York Times Magazine profile of entrepreneur Mark Cuban reported that Cuban writes up to a thousand e-mails a day and didn't stop composing messages even while being interviewed. "Go ahead," he told journalist Randall Patterson, "I can multitask."