May The Work Force Be With You

May The Work Force Be With You 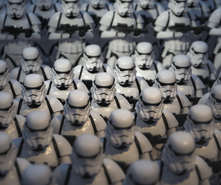 May 4 unofficially marks Star Wars Day, a time of celebration for the beloved film franchise. The plot lines and characters of the series, which launched 39 years ago, can be applied to reflect the challenges of the job market.

Consider the following lessons you can apply to your own job search or current occupation -- not just on May The Fourth, but the other 364 days of the year, as well.

Don't Be A Clone

The Empire's stormtroopers are expendable, because they are all clones. Filling just the most basic needs of your position will leave you similarly replaceable.

Meeting the baseline obligations expected of your role is obviously necessary, but adding new skills and volunteering to test these skills can make you stand out. Even if you're unable to apply a newly acquired skill to your current job, having a new competency on your resume can help make you the candidate an employer is looking for.

While it's great to learn new abilities, fine-tune these skills before taking on a project. Luke Skywalker went face-to-face with Darth Vader before he was prepared, and it caused him serious problems.

Eager as you might be for a new task, it's important to absorb the lessons offered by those with more experience than you.

If you're a job seeker with a newly acquired skill on your resume, but you lack expert ability, don't overstate your competency. An employer will be more receptive to a candidate with a willingness to learn than one who presumes to know everything.

Don't Be Afraid to Say No to A Bad Fit

Job seekers have different urgency when interviewing for a position. Perhaps you've been unemployed for awhile, or are trying to get out of a bad situation.

It's understandable that a candidate might be eager to leave for some job, any job in such a situation. Still, be on guard for employer red flags.

An interviewer who comes off like too much of an Emperor -- controlling, degrading, manipulative -- isn't going to be less so after you land the job. Trust your instincts in the interview process.

If a job's culture seems plagued by the Dark Side, you don't need to throw the interviewer into a pit like Vader did Palpatine. However, you can respectfully remove your name from consideration.

Who could have foreseen an Empire being taken down by a band of Ewoks? Likewise, you never know who can be a potential lead in your job-seeking process.

Listen to any possible networking allies for prospective openings. Gain insight on a potential employing company's workplace culture from those within the business.

The best connections can be the most unlikely.

As you get started on your job hunt, check out the extensive listings available through resources like CareerCast.com, and may the work force be with you.