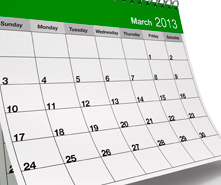 White collar managerial hiring continued its strong recovery in March, according to the CareerCast.com/JobSerf Employment Index, which gained 12.5 points from February. The continued hiring gains translate to an overall score of 116.4, the Index's second highest level in more than five years.

Much like February, the long-term sustainability of recent job market improvements is evident when examined through regional hiring.

“Only a few cities showed declines, and very small ones at that,” says JobSerf CEO Jay Martin.

Hiring across a wide range of cities demonstrates nationwide growth, rather than the select hiring we've seen in past months.

Washington, D.C., was long the index’s forerunner, maintaining a high hiring level amid economic turbulence. The nation’s capital is still near the top – but is no longer the top.

“The budget battle appears to have dethroned Washington, D.C., with Boston taking the lead in hiring for the first time ever,” Martin says.

Boston’s steady climb began in November at 140 points and reached 165 points in March. Beantown’s hiring improvements this month hit 9%, among the more impressive gains for the month. Only Memphis at a growth rate of 10%, San Francisco at 13% and Riverside at 16% were higher.

“Tech and biotech have been major drivers, with Boston and San Francisco registering huge gains in job growth,” Martin says.

Another factor helping shape March’s employment gains is the stock market. Rebounds on Wall Street in March led to new record highs for the Dow Jones Industrial average. Historically, the job market’s strength has coincided with that of the stock market and that is indeed reflected in the March index.

What does an overall Index score of 116.4 for March 2013 mean? The Index measures employment activity against a base score of 100, which represents the volume of job openings during the same period in 2007. A score higher than 100 means that there are more available jobs than in 2007, while one below 100 means that job seekers now have fewer opportunities available. Over the past 56 months, the CareerCast.com/JobSerf Index is higher at 116.4 than in March 2007.