Listen Your Way to a Successful Career

Listen Your Way to a Successful Career 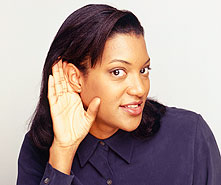 Your ability to listen is the most critical talent you'll need to succeed in your career. However, only about 10% of us listen properly, according to several psychological studies. In fact, most of us don't know how to listen intelligently, systematically and purposefully.

Consider the case of an executive during his annual physical exam. He mentions to the doctor that he's concerned about his assistant's hearing. He says he often has to say things several times before his assistant responds, and he believes the problem is getting increasingly worse. His doctor says that while he can't gauge the assistant's hearing without seeing her, he recommends a test.

For many employees, hearing loss isn't the issue. Think about your most recent conversations at work. If you remember what you said better than what you heard, you've probably developed some bad listening habits. Instead of really listening, you let your mind wander while others were talking. You were thinking about what you were going to say next before the others had finished.

Faulty listening habits can cause misunderstandings in a busy office. Indeed, many serious mistakes and organizational mix-ups stem from someone not hearing instructions. Poor listening can cause such issues as missing important appointments, misunderstanding directions, misinterpreting valuable suggestions and addressing the wrong problems. And there's little doubt that poor listening habits have stymied many promising careers. According to several estimates, about 45% of a manager's typical day is spent listening. Some managers believe they earn up to 60% of their salaries by listening.

The higher a manager is on the corporate ladder, the more time they spend listening to others. Interestingly, most executive-appraisal studies find that managers who are rated most efficient by subordinates invariably are good listeners. In job interviews, many candidates fail to impress managers because they listen so poorly. Hiring managers regard good listening skills as crucial, and use feedback to determine how well candidates listen. Answering questions incorrectly, or failing to grasp an interviewer's point, will sound the death knell on job offers.

Becoming aware of deficient listening skills, coupled with a conscious effort at overcoming them, will help you to master the art of listening. If you think that your listening skills need a tune up, try the following tips:

Interrupting people and finishing their sentences often damages communication. Deliberately try to inhibit your temptation to interrupt. Make sure the speaker has finished conveying the message before you speak.

Show the speaker you're genuinely interested and want to listen to them. If you aren't sure of the whole message, ask the speaker to repeat or clarify it. Constantly evaluate your own understanding of the message. The most effective way to break the interrupting habit is to apologize every time you interrupt. After a few apologies, you'll think twice before jumping in while a person is speaking.

The speaker is apt to feel rushed if you indicate your listening time is limited. Many people think aloud and grope toward their meaning. Frequently, initial statements only vaguely approximate what a person means. For the speaker to open up and crystallize their meaning, you have to give them enough time to speak freely.

Don't rationalize that you're too busy to listen. Instead, set aside whatever you're doing. This will reassure the speaker that he doesn't have to talk faster or abbreviate the message. It will also help you to concentrate on what's being said.

You'll act like a good listener if you're alert, look the speaker in the eye and lean forward. Radiate interest by nodding your head or raising your eyebrows, and offer encouragement with comments and questions such as, "Is that what you had in mind?" and "Check my understanding, but I think you're telling me…" followed by a paraphrase of the speaker's remarks.

You can think three to four times faster than a person can talk, which is a major reason for poor concentration. Impatient with the speaker's slow progress, your mind wanders off until you hear something that interests you. Then you realize you've missed something, and you don't really understand what the person is talking about. When the temptation to take brief mental excursions becomes irresistible – this frequently with long-winded speakers – your listening efficiency drops to near zero.

To use your thinking speed to full advantage, keep analyzing what the speaker is saying as they talk. Mentally sum up what's been said. Weigh the evidence by considering whether the facts are accurate and the viewpoints are objective, or whether the speaker is only trying to prove a point.

If you become too involved in a person's speech style, you'll lose track of the message. Force yourself to concentrate on their message, not their accent or style of speaking, speech impediment or disorganized thought pattern. Ask yourself: "What is this person saying that I need to know?"

Concentrate not only on what's being said, but also on the attitudes, needs and motives behind the words. Remember that the speaker's words may not always contain the entire message. A change in tone or volume may have additional meaning. So may facial expressions, gestures and body movements. Being alert to nonverbal cues increases your total comprehension of the message.

For example, sometimes the message and auditory and behavioral cues differ considerably. Although the speaker says they're excited about an idea or project, his lack of spontaneous movement, wandering or downcast eyes, unanimated tone of voice, masked face or hunched posture may indicate that they feel differently. Relying on words alone is like trying to work a jigsaw puzzle with many pieces missing. You get the general idea, but there are gaps you just can't fill.

Poor listeners can easily distracted get by sounds, objects and people, such as a police siren, a cellphone ringing or a person passing in the hallway. Good listeners position themselves to avoid distractions, or concentrate harder on what the speaker is saying.

By following these strategies, you will become a more effective listener, which in turn will make you a more valuable commodity in the job market and workforce.