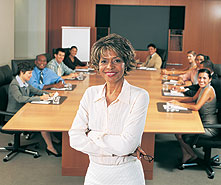 If you've recently been promoted into your first managerial position, congratulations! Now comes the hard part – giving up on the idea held by most young managers that you can (and need) to do everything yourself. Learning to delegate responsibility likely will be the toughest, but most critical part of your new job.

Managers who delegate well and follow up consistently are able to accomplish infinitely more than those who hoard tasks their subordinates should be doing. Remember that the key duties of a manager are to plan, organize, coordinate, set goals, establish priorities and think creatively. By delegating appropriate tasks to subordinates, you allow time for these tasks while saving your company money by completing a job with a lower-paid employee. Additionally, delegation enriches the jobs of those working for you by providing them with more challenges, authority and variety.

When you assemble a staff that demonstrates competence, your reputation will grow. Talented staffers will seek jobs in your department, and morale, respect and trust will grow as more gets done. Recognition follows, and top management will eventually see that you're ready for another promotion.

But despite these clear benefits, there are dozens of reasons why many managers don't delegate. Some are based on rational reservations. Others are more emotional or psychological. Here are some of the most common:

This is best described as "What happens if something goes wrong?" syndrome. Fearing unsatisfactory results, a manager may be unable to trust a subordinate's judgment or ability to follow through on tasks.

Some managers are perfectionists. With such high personal standards, they know they can do the job better than a subordinate and fear substandard results. As a result, if they do delegate, they wind up micromanaging every detail of an assignment. If a subordinate isn't ready to tackle a job, the problem is typically due to a lack of training – something that, as a manager, you should be providing.

Many managers, especially those recently promoted or hired, feel insecure. They may be overwhelmed by their new responsibilities and, as a result, they regress to the familiar security and routine of the work they did before they became managers.

A manager must have a clear understanding of their responsibilities and authority. They can delegate only those responsibilities that have been assigned to them. Being uncertain about this makes it impossible to delegate effectively.

This is a "What if the subordinate does too well?" syndrome. Rather than make an opportunity for a talented subordinate, some managers go out of their way to discourage new projects and play down existing accomplishments. Morale in the department will reflect the manager's insecurity.

This manager believes the sun revolves around them. They make all the decisions and consider their way the only right way. These people hire workers who reinforce this self-image, and use selective communication to prevent others from seeing the big picture of what's going on. These managers also fear losing their status by no longer being regarded as "the expert" or the principal architect of a well-executed project.

A manager may be hyperactive and afraid that delegation might leave them with nothing to do. Quite commonly, they complain constantly about overwork, and their subordinates have difficulty getting any face time.

Delegation might be construed by key people in the company as the manager trying to avoid work. This can be a sensitive point. Such managers also feel that it's a sign of weakness to need help keeping up with workloads.

This is a "monkey see, monkey do" syndrome. If a superior doesn't delegate, the new manager will reason, "My boss got to where he is with that style of leadership. Why shouldn't I do the same?"

Possession of a clearly defined territory represents power and security. Insecure managers guard their space and will often fight to protect it.

Managers who don't delegate typically mistake delegation for giving up responsibility and authority. They fail to realize that effective delegation requires only the sharing of turf. It doesn't mean giving up a thing. With the sharing of territory, your subordinates will approach tasks with much more interest and enthusiasm than they would if they were assigned a job in which they held no stake, and you'll be rewarded with the recognition that you're a talented manager of others.