Layoffs, Downsizing, or Being Fired: It All Hurts

Layoffs, Downsizing, or Being Fired: It All Hurts 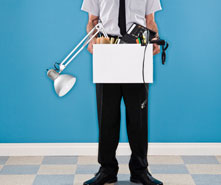 With official unemployment rates at over 9% and some analysts saying that when you add the under–employed and those who have given up looking for work, it’s over 15% of the workforce, many workers have begun to anticipate that dreaded feeling of being told that their services are no longer needed. Anyone who has experienced a termination knows it has severe emotional and physical consequences including depression and small to large persistent physical ailments. How can you prepare yourself for losing a job you thought was secure and, more to the point, what can you do to stay employed?

As an example of how badly done the termination experience can be, Matt Cooper, an executive at Accolo, a recruitment outsourcing company, wrote in the New York Times that when the company began having financial problems and downsizing became necessary, upper level executives called employees into a conference room, one at a time, told them they were fired, and had them walk to their offices, pack up their personal items, and immediately leave. One of his co-workers was so frightened of being called in that he hid in his cubicle until a vice president of the company found him and told him the bad news.

Jean Colette, a supervising OR nurse at a New Jersey Hospital told me that every June, 50 people are fired across staff lines. The hospital decides if their salaries and benefits are consistent with the quality of their work. Because the fiscal year runs July 1 to June 30th, the director of each department calls people into their office on June 29th and gives them the bad news and a severance packet. Because older and more experienced workers make better salaries and are usually more effective at their jobs, it’s often the very best people who get fired. Anxiety is so bad in June, Colette told me that almost nothing gets done.

How should you prepare for the possibility of being fired?

Allison Doyle, a management consultant notes that over 250,000 workers are wrongly terminated each year. Even if your job is considered “employment at will” where the employer can fire you without a reason, you still have rights if discrimination is involved, public policy is violated, or if an organization’s guidelines for termination are incorrectly followed. You also have rights if a company terminates you because you are a whistle blower or refuse to commit an illegal act when asked to do so by an employer. If you believe you’ve been discriminated against, immediately check with your state and federal departments of labor to see if your termination violates state or federal law. If it does, you have a legal case against the employer and it may lead to reinstatement or a very nice settlement that tides you over while you look for work.

Anyone reading the financial news understands the precarious economic position the country is in and will likely be in for a long time to come. Don’t wait passively for termination to take place but be aware of the often subtle signs that your organization is in trouble and begin looking for other jobs while you’re still employed. Those signs are clear enough in the public sector where newspaper articles carry stories of budget cuts everyday. In the private sector, earnings reports, office gossip, abrupt changes in leadership, frequent mission changes, and emergency meetings to reorganize are all signs of trouble.

It’s a sad fact that employers would rather hire currently employed workers than workers who are unemployed. The reason is the belief, however true or false, that employed worker’s skills are more up to date and that their work ethic is still intact. Rather than waiting until after you’ve been terminated, begin looking for work while you are still safely employed in organizations that have stronger financials and seem clear of future layoffs.

The more you have to offer an employer the more likely you are to get another job. Dr. Nan Carle, Director of Community Initiatives at Arizona State University and a longtime public sector manager, encourages her workers to gain new knowledge and skill for this very reason. Out of her limited budget, she provides opportunities for workers to receive added education along a spectrum of activities that will not only help in a current job but will expand a workers’ employability if budget constraints require her to downsize staff.

Any number of possibilities open up to you when you keep in touch with others. You can do this by joining local organizations in your field, volunteering to help out when there are charitable events, speaking on subjects you have expertise in at workshops and conferences, and just the day to day niceties that help people remember who you are and why they might want to add you to their staff. Dr. Carle says that networking involves reaching out to others, connecting with old and new friends, and seeking advice, support and encouragement from others, when needed. In any given field, there are people of wisdom who many of us go to when we need help. These folks are often well connected and know the job market well. In fact, many of us get jobs because of people we know including former teachers, bosses, and mentors who often go to bat for us. Keep in touch because you never know when you might need their help.

You need to convey a very upbeat and positive attitude. Bad or neutral attitudes suggest burnout or disinterest. Workers who fall into these two categories are often the first to lose a position. Don’t be a prima donna or think that you’re indispensable. None of us are indispensable. In a down market, prima donnas often suffer badly.

Do these suggestions always work? Amber Elefson, a public health professional working for a non-profit in San Diego (her identity has been changed to protect her ability to network), and pregnant with her first child asked her employer if her job was secure and was told that it was. Two weeks later, amid glowing reviews of her work and praise for special projects she had done, she was terminated because of severe budget constraints.

Fortunately, she had headed the advice to continue networking and was able to move on to a new job, almost seamlessly, but she remains skeptical about the ability of supervisors to foresee the future. “When they need to fire you,” she told me, “management often makes quick decisions. Program or front-line staff is cut first. Because mid-level managers haven't been privy to higher level budget discussions, it often comes as a shock.” Ms. Elefson told me her supervisor “drove two hours and cried when she told me I was being terminated. She said that it was the most difficult thing she had done in 30 years as a professional.”

With the economic picture looking as bleak as it is, hang onto your job but be prepared for the worst. Look for signs of trouble, continue to network, expand your skills, and maintain a positive attitude. Continuing to look for more secure jobs is always a way to move seamlessly from your current job to another if bad times and reduced funding affect your job security. Better to be prepared than to be blindsided as so many workers have been over the past several years.

Dr. Morley Glicken is Professor Emeritus in social work at the California State University system. Parts of this article come from his newest book: “Treating Worker Satisfaction and Job Burnout during Uncertain Economic Times” to be published in 2012 by Elsevier Publishers. His website is morleyglicken.com. He may be contacted at: mglicken@msn.com