Laid Off? Check Your Look...and Your Attitude

Laid Off? Check Your Look...and Your Attitude 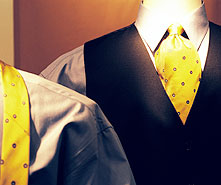 After Michael Guarini lost his job as the health division president of Ogilvy & Mather Worldwide last year, he started dressing up for job interviews. The advertising and public relations firm had a business-casual dress code, but now Mr. Guarini says he generally wears business suits, even with people with whom he is long acquainted. This often requires humorous deflecting. "People invariably say, 'I hope you didn't wear a suit for me,' " says Mr. Guarini. He has two pat replies: "You're worth it," or, "I had some other meetings today."

In the aftermath of a layoff, style is critical. And it's about more than the decision to polish a wardrobe. The way people handle losing a job can make all the difference in what comes next. From how they convey the news to colleagues, to the type of clothes they wear and how they punctuate their emails, the newly jobless must use careful footwork to successfully navigate a job search.

When in doubt, it's a safe bet to retreat to conservative styles. After Michael Bragg was downsized from his New York-based job at a high-end European fashion brand, he went out and bought a new pair of shoes -- lace-up, American-made Aldens. Play it straight with emails, too. Sure, sometimes it's perfectly acceptable to shoot off a short, all lowercase missive to a colleague. But punctuation is a risk-free option. The same goes for social-networking. Now is not the time to post pics from a beer-sodden barbecue and share them with everyone in your network.

Many executives must learn to rein in their free-wheeling style, too. Amy Friedman, chief executive of Partners in Human Resources International, got an emergency call to help a recently fired senior marketing executive at a big media company. The laid-off executive had broadly bad-mouthed her former employer in what she saw as casual conversations. Three weeks later, with damaging gossip swirling, it was Ms. Friedman's job to form a recovery plan.

"We scripted it out," Ms. Friedman says. They made a list of each person the executive had phoned, including what she told them, to the best of her memory. Then they rehearsed an apology, along the lines of: "I was very reactive that day, but I'm on good terms with my former organization and I'd really like to enlist your support."

There's no reason to agonize over telling people you're job hunting. One out of 10 workers is unemployed these days, according to the Bureau of Labor Statistics. Jonscott Turco, a vice president with Partners in Human Resources, says most people have become so accustomed to layoffs that they assume it was a downsizing even if the person was fired for cause. It's best to choose words that are direct and clear without providing much detail: I'm no longer with my company and I'm looking for new employment opportunities. "People get into a jam when they start to give details," Mr. Turco says.

Most people say they know to avoid a bridge-burning tantrum if they get fired. Of course, we'd all like to think we'd handle the bad news well, but even people in the employment industry can be caught off guard by a layoff, proving just how important it can be to consider your "fired style."

An executive recruiter for hedge funds says that after he was fired earlier this year, "The rest of the day I was on the phone with people telling them what happened and basically getting it off my chest." The recruiter, who asked that his name not be used, says he didn't think of this as a networking move because the people were friends.

Many career counselors recommend taking several days or even weeks off after losing a job-time to prepare mentally as well as to organize for a search. Joelyn Cecere, who heads the financial services practice at career consulting firm Drake, Beam, Morin Inc., likens this with recovering from a marital split.

"Sometimes when you go through a divorce, you think you're ready to date," Ms. Cecere says. "But often...it's obvious to everybody but the person that that person does not need to be out there dating."